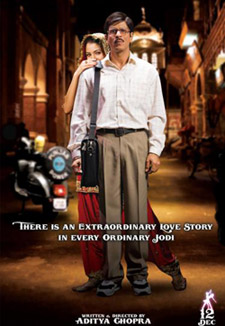 On the occasion of Shahrukh Khan’s birthday, the first song promo’ Haule Haule’ of his upcoming film ‘Rab Ne Bana Di Jodi’ was unveiled. The song features Shahrukh Khan in his bespectacled look and introducing Anushka Sharma in her best simplicity.

This is for the first time that Yash Raj Films has released a song promo before the music release of the film and why not when the occasion is so special.
The promo has already hit the television channels and is the first look of the film.
The movie will hit the theatres on 12th  December 2008 while the music will be launched on 6th December, 2008.
To promote the movie once again YRF has come up with a unique marketing strategy where it has installed life-sized 6 feet tall standees at all theatres, which gives it viewers an opportunity to view both the looks sported by Shahrukh in the movie.
It looks like a good treat for all SRK fans that are eagerly waiting to get a look of his upcoming release.
Featured Video