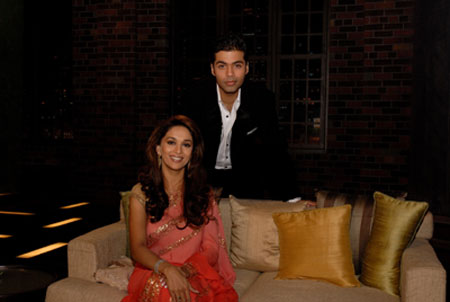 One of the most poised and powerful actress that Bollywood has ever seen , the star with the most expressive eyes , the actress who looks the most elegant and graceful in every dancing step, the most beautiful woman ever with the most maginifcent smile!! The star for whom Adjectives can just keep flowing. This Sunday, Karan chats with none other than the Gorgeous Madhuri Dixit!! ï¿½ Watch her talk about her comeback in Bollywood after six years, what all has changed since then, her family, life in the US and lots more only on Koffee with Karan, this Sunday, June 24th at 9 p.m. on Star One and Star World.

All is set now for Madhuri to make her much-awaited comeback in Bollywood with " Aaja Nachle". Watch Madhuri share the secret that after a long hiatus of six years, she was a little tensed to face the camera on Day One! She also admits that when Aditya Chopra called her for this film, she asked him, " You really think people want to watch me?". Watch Madhuri say that all in the industry has changed in this span of few years. According to her, all is now very disciplined and well planned and it has made life very easy for the actor. Catch Madhuri speak about her life after marriage, her first meeting with Ram, the fact that they compliment each other very well and that he has been very supportive of her decisions! That's not all, on this week's exciting episode, watch out as one of Bollwood's finest and talented actress who is a die-hard Madhuri fan makes a surprise visit! Who is she? Wellï¿½ you will just have to wait and watch!

Watch the very conversational Madhuri return fun doubles in Karan's fiery Rapid Fire Round. Who according to Madhuri is the hottest hunk in Hindi Cinema? Other than Ram, the sweetest marriage proposal she has receive? Sooraj Bharjatiya' s next or Sanjay Bhansali's next? Sridevi or Juhi? Who does Madhuri choose? How does Madhuri combat Karan's volley of questions? Was there enough fire in her answers? Tune-in to this week's exciting episode!

For those who just cannot wait to know how well Madhuri answered, here is the excerpts from the interview:

Karan: Welcome to 'Koffee with Karan', Madhuriï¿½ Have you seen the show?

Madhuri: Yes I have seen a few episodes

Karan: You are back Madhuriï¿½ after so many yearsï¿½ how many years has it been?

Karan: And yours is possibly the most talked about comebackï¿½ how does it feel?

Karan: So, were you at all nervous to face the camera on day one?

Madhuri: Well, day one I was a little hassledï¿½.

Karan: After all those yearsï¿½

Madhuri: Ya, after all those yearsï¿½ ahhh, I don't know why you feel you have lost touch, you know you are going to be on the set, getting ready, the whole process you knowï¿½ and I was wondering will I be able to do itï¿½ but, once I was thereï¿½ and I started workingï¿½ the first day went by, and on the second day I was fineï¿½

Karan: Completely detached in the 6 years that you have been thereï¿½ in these six years were you in touch with Indian cinema at all?

Madhuri: It was hard because I was having kidsï¿½ there was Aryan and then 2 years later, I had Ryan ï¿½ I was really busyï¿½ so couldn't really catch up with anything.

Karan: What about Ram, has he been totally supportive of your decision to come down?

Madhuri: Absolutelyï¿½ I mean this decision was takenï¿½ like we both kind of sat down and made a conscious decision whether I should be doing this or not and he has always supported meï¿½ if you don't want to workï¿½ you want to sit at home and look after the kids I am happy with thatï¿½ but, if you feel you want to do something then I am with you all the wayï¿½ whatever the decision will be ï¿½

Karan: So, Aaja Nachle is the film that you are working on, and is slated for release in November, where you are working with Kunal Kapoor, Konkona, Akshaye Khanna and a whole lot of youngstersï¿½ how was the experienceï¿½ it was lots of fun?

Madhuri: It was lots of fun, it was great, also, because it is fun working with all these actorsï¿½ there were times you know, when I literally didn't have to act, I just had to react to whatever they are doing... they are such good actorsï¿½

Karan: Do you feel the acting style is more natural, like you have Konkona, who is a very natural actress?

Madhuri: Yes, Konkona is a very natural actress and so is Kunal ï¿½ and I think the dialogues are very natural, the situations, they are not like larger than lifeï¿½

So, don't forget to tune in as Karan chats with Madhuri Dixit on Koffee with Karan this Sunday, June 24th at 9 p.m. on Star One and Star World.

14 years ago amazing i cant think of even having a 3 crore desigining interior....bollywood makes their dreams come true

+ 2
14 years ago Interior designing is also a art....inside home if someone feel good..they can perform outside also...

14 years ago wasnt this given to twinkle khanna...? oh well... i dint know suzanne was a designer...good to know ;)

nigosawa 15 years ago she is the all time best...looks and talent wise
i always used to think when would karan invite her..he seemed to have invited every tom dick and harry but he never invited madhuri nor rekha
finally she is coming and i am so glad about it
cant wait to watch it

15 years ago definitely thrilled to have the dancing queen back!!! she looks her best...can't wait for KWK this sunday!