Pawan Shankar, still remembered for his terrific performance in Star One’s Siddhant, is all set to make his debut in Bollywood with Mr. Bhatti on Chutti. Not only that, the talented actor also has two more films in his kitty. Pawan, the budding star, talks about characters he portrayed in his upcoming films and shares about his association with Amitabh Bachchan.

Q. You are entering Bollywood with three films in hand; did you ever expect such a big bang?
A. Time will say if it’s a bang or head bang. I feel this is the golden period of Bollywood where everyone can try their luck. Now-a-days, lots of experiments are been done in films which according to me is a good thing. 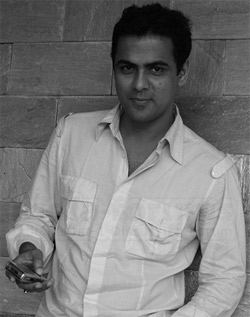 A. Anubhav has always liked my work. He was considering me since a long time. And there he found an apt role for me. Nevertheless, I am very fortunate to work under him.

Q. Despite of having such a huge cast, Anubhav Sinha’s latest movie, Cash, didn’t do well at box office. Do you think Rajdhani is going to prove an exception?
A. We really can’t compare these two films. I feel that ultimately a script is the real hero, so star cast doesn’t really make much difference. The recent example is Tashan. In spite of having a huge star cast it doomed at the box office.

Q. By its name Mr. Bhatti on Chutti seems to be a comic flick. Please tell us about that.
A. Yes, it is an out and out comedy one. My character’s name is Prem who goes abroad and finds gori. He just wants to live there.

Q. Is your second movie, Niyati, an arty?
A. You cannot mark it as an arty. It can be termed as an off-beat film. There is no song in the flick. Actually, through this film we are trying to focus on one of the serious issues of our society.

Q. Out of these three films, which is going to be your debut one?
A. Mr. Bhatti on Chutti. It is tentative to release sometime around July. What is more important is that after this film gets released, it would be counted as my third association with Amitabh Bachchan with whom I have already done two commercials.

Q. This year is going to be television actors’ year with so many tele-actors making their debut on big screen. Are you scared of your counterparts?
A. On the other contrary, I am very keen to watch other tele-actors work in films, too. In fact, I am eagerly waiting to watch Rajiv Khandelwal’s debut as I think of him as a very refined actor. So, there is no competitiveness but a healthy competition.

Q. Are you eager on saying alvida to the small screen?
A. It’s not about saying alvida, but just opting to enter into more creative arena. But definitely, if some lucrative offer comes from television, I am going to take that up for sure.