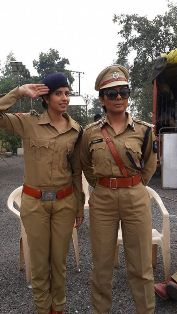 As the strict IPS officer Agrima Singh, Maninee De Mishra is looking powerful in her strong character in Diya Aur Baati Hum on Star Plus. The show has been having its shoot at Karnal in Haryana and Maninee is based there since the last week of December. Braving the winter chills the ever bubbly Maninee speaks about her experience of working in the show, "It has been a fantastic experience. The entire set up right from the producers, the director, co-actors everyone is just great to work with. I am having an amazing time despite the fact that I am far away from home for such a long stretch."

Maninee who is expected to come back to Mumbai in mid-Feb says she misses her husband, Mihir Mishra the most, "I will not get a break and will come back home only after Valentine's Day and since Mihir is busy with his work and events even he has not come to meet me... I miss him so much!"

However, for someone who always looks at the positive side of any situation, Maninee is happy to be surrounded by good people in the form of the cast and crew of the show, "We all stay at the same hotel near the shooting location which is comfortable since we can connect well with each other. We get a wake-up call at around 6 am and we report to shoot at 7:30 am and continue working till the light is clear. Sometimes we have to wrap up when it gets foggy or cloudy but even then we continue with the indoor shoot."

The weather has been quite chilly for the past couple of weeks and the early morning wake up ritual reminds Maninee of her own childhood days, "It is quite cold in Karnal and when the temperatures go down to 5 degrees and less it can be quite freezing here. It reminds me of my childhood days since I am a Delhi girl and I remember I had early morning school. In the winters going to school at around 5:30 in the morning we would be shivering with cold unable to see the person in front of me due to the fog." 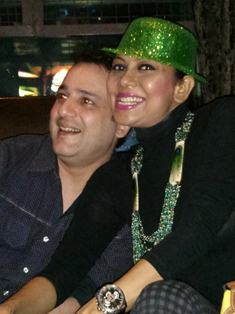 The outdoor setting and the weather has been the basis for the camaraderie between the actors says Maninee who says she can stay serious only between hearing the words Action and Cut, "Me, Neil Bhatt, Charu Asopa and Alan Kapoor have become a chandaal chowkdi. It is a mad house when we all are together and we bond so well off screen that it shows on screen too. I have earlier worked with Charu in Devon Ke Dev. Mahadev but had never worked with Neil or Alan but we hit it off instantly which is fun since I believe work atmosphere should always be nice and a place to be enjoyed too!"

Maninee also has taken a liking for Deepika Singh who plays the main protagonist in the show, "Deepika is a very grounded girl and is not the proud, show off types. She is very mature and a joy to work with. I have seen other girls too who play the main leads and I have seen her attitude too and I feel she is very balanced and sensible person. With her kind of attitude I'm very sure she will reach places and go further in her career."

Her character of an IPS officer is a cameo and Maninee says she will miss being part of the show once her part wraps up, "In the show the jawans call me Singh saab and now everyone has started calling me the same. I am now used to being a masculine personality (laughs) and I will miss my character, my co-actors, the show and all the fun that we have had. However, I have realized one thing that this show has come to me at a certain point in my life and career when I needed it the most. Since long I wanted to play a cop and it was wonderful to get to play it in Diya aur Baati, a show which has such fantastic TRPs due to its mass appeal. I have got positive feedback and i felt proud that during my entry and the twist in the story the TRPs were as high as 6. It is always great to be associated with the No. 1 show of the country even if it is for some time only."

Maninee feels this might just lead on to something big, "My range has increased and people have seen me in a variety of characters now. By god's grace I have always been appreciated and now I have added one more dimension to my skills. It is one more feather in my cap and I hope someone makes a show like this with the focus on the armed forces where I get to play the role for a longer time."

Well, we too wish the same Maninee!

b2011 6 years ago Love your role as Inspector Agrima Singh. You are doing good.

Disaniya 6 years ago Deepika Singh Is the best...
Keep ocking!!

AniD.. 6 years ago Deepika singh is the best..
Dabh rocks