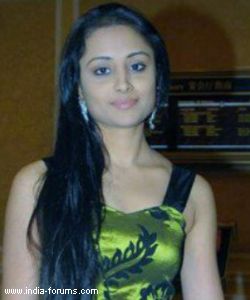 The audience has already witnessed the effervescent and innocent side of Anupriya Kapoor as Tani on Star Plus' Tere Liye, but with the channel's adventurous show Jee Ley Ye Pal, an unseen face of the actress has come out in the limelight.

In a candid chat, Anupriya shares her experiences about this breathtaking show and life after Tere Liye…

How was the whole experience of the show?
I enjoyed doing the show a lot and made a bunch of friends. In this show we were put in difficult situations and were expected to strike a chord with different people which has taught me to handle various circumstances and helped me to get out of my shell.

Do you think there was a game plan behind every elimination?
That was what I was most apprehensive about and hence while I took up the show, I wanted to know each and every detail and also the people participating in the show as the kind of participants let you know the standards of the show. During the elimination there was no such thing as plotting or planning at all. All the eliminations were fair where people who performed well survived while those who did not got eliminated.

Your brother was also a part of a reality show. So did you take any tips from him?
Not really, because he took part in a singing reality show. Also, earlier I worked on several reality shows but behind the camera, so I know how it works. And those were also singing and dance based reality shows where there was no planning or plotting against each other. In this case, this is a travel based show where everyone is on their own and it is us who gets to decide who stays and who should leave.

Personally are you adventurous?
Oh yes, I am but at the same time I keep in mind the security and my limits.

What is the craziest thing you have ever done that was extremely adventurous?
I think this was the one because I never thought I would ever race in my life. Because of this show I got to do car racing which I think was the most adventurous part of the show apart from the tasks we were assigned.

Tani was a popular character on television; do you think Jee Ley Ye Pal has helped you to break that image?
After Tere Liye got over, I think people got enough chances to know the real Anupriya Kapoor through various interviews and appearances. I think this show will just be another addition to it where they would be able to see Anupriya Kapoor in the real avtaar.

Do you think Tere Liye went off air soon?
I felt that the show went off air even before I could lead a life and that was very disappointing. But otherwise I believe that whatever happens, happens for good.

What do you normally do when you are not shooting?
I hit the gym, spend time with my family and friends and shop a lot as I am a complete shopaholic.

Are you planning to come back in a daily soap?
I think there is time for that. There are a couple of things in the pipeline but I am afraid I cannot talk about it at the moment.

There have been rumours about your alleged  tiff with Ekta Kapoor. Would you like to clarify yourself?
When Beytaab Dil Ki Tamanna went off air, there was indeed an issue between Balaji and Anupriya Kapoor but not Ekta. Later, it was Balaji who approached me for Tere Liye and we kept the Beytaab episode behind and started afresh with Tere Liye. Today there are no hard feelings between Ekta and me.

What are your plans after this show?
Actually I do not plan anything. Whatever comes my way, I pick it up.

A parting message to your audience…
I just hope the audience enjoys watching the show as much as I enjoyed doing it. They have always seen me simply clad in sarees and suits, so this is something new that I have attempted. They have not yet seen me performing stunts so I am sure the audience will like it.

Fangirl_Annie 8 years ago Miss You My Angel, Miss You Too Much. :(

anupriyadoll 8 years ago When you feel that

God is Rubbing U against Rocks

Do not lose Hope

The Truth is that

He Is Polishing a Diamond

-Ramya- 8 years ago awesome show JLYP! Loving you! All the best for your projects

Fangirl_Annie 8 years ago you rock my angel! doing gr88 in yeh pal! love u loads!

harshiyalover 9 years ago hoping to see you soon in a new show after RJLYP!!