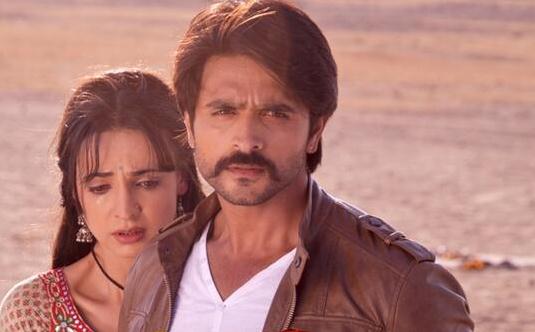 His lovely brown eyes do most of the talking as his character is shown to be the silent, brooding types. Ashish Sharma who is seen as Rudra in Nautanki Films Rangrasiya on Colors, has managed to communicate a lot of emotions through his eyes since he speaks very, very less in the show.

However, the young man is eager to talk and not only does he talk sense he even displays a subtle sense of humor during the course of this interview.

You come across as a balanced young actor, tell us about your Theatre background and how did you get into acting.

I have been doing Theatre ever since I was in school and it has been a constant part of my life. I got interested in theatre from 6th standard and was always part of the cultural programs. Later in college, I continued to take an active part in dramatics. I took it seriously and after graduation was part of a theatre group run by Vijay Mathur.

I wanted to join NSD (National School of Drama, Delhi) too but was dissuaded by everyone around who thought I could do better even without a course in NSD and that I should directly try my hand at acting. I came to Mumbai but I still felt that I needed to learn the art so I joined Anupam Kher's acting academy where I polished my skills and the dean at that institute Mr. Yashraj Jadhav who was my teacher played a pivotal part in training me.

You are once again doing a negative character in Rangrasiya. Was it a conscious decision?

Even as everyone says that I have played negative in my earlier shows too I would say that I never look at them as negative since I don't understand the concept of negative, 2nd lead, or any such since all of these characters are just on paper but for me they are living beings when they come on screen. Human beings can never be God and if you look at the typical male leads you will realize that even though it feels good to see them like that it doesn't really happen in real life. And real life is what influences me since in real life everyone has two sides and multiple emotions on display.

Even when it comes to playing Rudra in Rangrasiya I have never looked at it as a negative character since I feel that human characters have both sides - good and bad so it is very subjective since all human beings have complex emotions. Multiple emotions give you a scope to explore yourself as an actor and even as an individual and these experiences stay with you for life.

How did you prepare for such an intense character who is different from the normal main leads we see on Indian TV these days?

I have a habit of writing in my diary and I used to make points about Rudra - his thought process, scenarios, character which I wrote in verses, words and abstract notes which helped me a lot initially. Even now when I am stuck in a situation I refer to them. They helped me a lot to get into the psyche of the character.

I got very serious while preparing for my role and when Archana Taide, my wife got to know the type of character I was playing and the way I was preparing for it she was initially furious but now she has come to terms with it. I started preparing almost 1 - 1 months before we started the shoot and I used to stay awake for longs hours through the night. I quit driving my car and borrowed my friend's Enfield bullet to get a hang of riding it like Rudra does now in the show. I tried to get a dazed and disconnected look in my eyes and to get that thing right I would sit at my window staring blankly outside. I would quietly sit like that for almost four hours doing nothing which would drive Arachana insane.

Any contribution to the character from your end?

My contribution to Rudra's character has been in my looks in particular my moustache which I insisted on keeping since I am a Rajput from Rajasthan in real life and I knew that it would add a touch to my character. It was very hard to convince the creative team since they thought a main lead with a moustache would look odd in love scenes but I was adamant. I grew one and groomed it just for the sake of this show and it has worked and how! The special twirl to my moustache has lend an arrogant attitude to the character and these small details matter a lot. Fans have been liking it too and members of India-forums too have liked it and I guess they have even given me a nickname associated with my moustache. It feels nice to read about it.

The show which started with a lot of promise to be different with it's Guns and  Roses theme seems to have taken a different turn with romance waltzing in.

I would say Rangrasiya is more about Fire and Ice whereas Guns and Roses was just a symbolic thought when the show was launched. It will be taken further as per the ratings and the demands which will decide whether the hate story clicks or the love story clicks.

You and Sanaya Irani look sizzling together. How is it working with her?

Before Rangrasiya we had never met, forget knowing each other so we were not at ease right from the start but now the comfort level has increased and we now have a healthy relationship. Sanaya is one of the popular actors on Indian TV today but is very easy going and helpful. For me she is just another co-star who never came across as a star. She is very chilled out and we now gel well.

Are you happy with the feedback that you are getting for your efforts?

Yes, I am very happy since the feedback has been tremendous and special for someone like me. When my teacher Mr. Jadhav saw it he said, 'Now I can proudly say that I have taught you.' He has trained many Bollywood actors who are now on top so it was a morale boost for me. 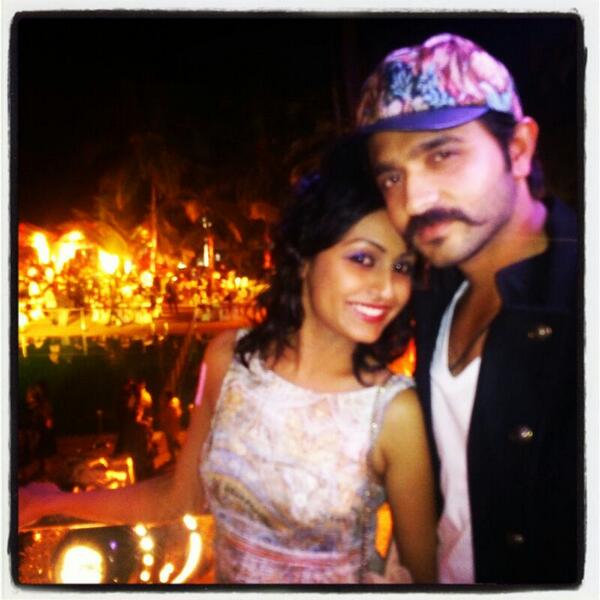 And what about the fan following?

Fans were there earlier too but after Rangrasiya they have increased in multiple folds across the globe. I get all sorts of mails and tweets too. They write and send me crazy stuff and are mad about my moustache and my eyes.

Yes, there is this one girl who stalks Archana no end and it is not funny. She even abuses Arachana just because she is married to me and has been slowly trying to brainwash her into leaving me! Archana just jokes about it and says, 'Ya, just take him for a day and you will get to know!'

Laughing out loud, Ashish is not aware that there are many fans who may just want to take Archana's offer seriously! With Valentine round the corner we wish the couple lots of love, luck and happy moments together!

Haridas 5 years ago Ashish Sharma yes indeed we are mad about our Major Sab with the killer look.

...Rapunzel... 6 years ago You're doing a good job as Rudr.
Sanaya is rocking as Paro.

thaaniya 6 years ago i love you sanaya and ashish ...
u guys r great together ...

mehreenkhan 6 years ago Sanaya Irani and Ashish Sharma You are the most cutest actress ever !Keep on rocking & shining always !.

Aarya4ever... 6 years ago Always loved you... first in Gunahon ka devta and now in rangrasiya

Melosa 6 years ago PhenoMENAL as Rudra, Ashish! Keep up the good work... Have a good marriage :)

SannyDeewani 6 years ago Sanaya Irani and Ashish Sharma you guys rock as Paro and Rudra..
Congrats on #WeLoveSanayaAshishRangrasiya trended worldwide..

reshu.90 6 years ago Sanaya Irani loving you in Rangrasiya
Ashish Sharma great job in the show Rangrasiya as Rudra