View Profile
From their first show, Amber Dhara Siddharth Tewary's Swastik Pictures has given shows of diverse variety and inputs. Their popular show Agle Janam Mohe Bitiya Hi Kijo on Zee TV threw a light into a unique social issue and gained a lot of appreciation.

Presently they have shows like Navya and Phulwa on air with Shobha Somnath Ki as the latest addition. In a conversation with TellyBuzz, Producer Siddharth Tewary shared his television journey and their vision for the coming years... 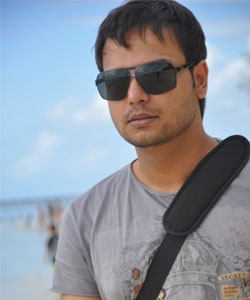 What has been so unique about your journey from Amber Dhara to Navya?
It has been four years since Amber Dhara was made and the journey has been fabulous with all the possible ups and downs. We have our own learning experiences that made the journey more beautiful. With an outstanding start, the response has been great and we are trying to do something different throughout and the efforts will continue.

What is so unique about Phulwa? Rumour has it, that it is inspired by Phoolan Devi's life?
Frankly speaking, we never claimed that the show is based on Phoolan Devi's life and this is not a true story at all. The character is inspired from her, but that does not mean that the show is based on her life.
What was the reason that Sargun Mehta was chosen to be the older Phulwa?
Sargun was the exact person who we had imagined and her eyes are very expressive. Though I had not seen any of her previous works, I was aware of her abilities. I do not think anyone else could have done the character better than her.
The ratings of the show have not been impressive even after the leap. Any comments?
Yes, currently the ratings have dipped, but at the same time we are concentrating to pitch the show better with various inputs. But at the end, the numbers are not in our control and as far as competition is concerned, its always with us.
What is the USP of Navya?
Navya, from day one is Vivek's concept and when we discussed the story we knew that the show is going to be a tough one to portray as we have to show both the old and new generation. The USP of the show is that we are trying to bridge the gap between the old and the new generation.

What is your level of involvement in Phulwa and Navya? And where does Vikas Seth figure in the entire scenario?
I am the Creative Director of both the shows; hence I look into the creative inputs of the show. Vikas and Rahul are the ones who really run the company and look into the financial aspects of the show.

The lead girl Jannat of Phulwa is said to be loaded with lots of attitude. True?
Not that I am aware of.

Have you taken any inspiration from your own teenage years for Navya?
Frankly speaking, when we make a show, inputs are bound to be taken from real life and you can really see mine and Vivek's life that in the show. The teenage love, the issues that Anant and Navya go through are something that everyone undergoes. You will get a sneak peak into my family when you see Navya's family.

You are known for making different shows for different channels? Is that a conscious decision?

I believe in telling the same things in different ways and we just have to know the target audience. Every channel has a requirement and when the same issue is shown in a different way, it brings freshness as well.
What is your vision for Swastik pictures?
To create really honest work; we have the trust in what we do and the same time outcome is of matter.
On what criteria have you selected Shaheer Sheik and Soumya as the main leads of Navya?
There have been hundreds of auditions for these characters and though I have not seen his previous work, everyone was really appreciative about Shaheer Sheikh. Soumya was a last minute addition and that too after a lot of hunt. She really fits in the role.
What is the involvement of Vivek Bahl in the show?
Navya is his baby wherein the concept and story is his.

Your production house Swastik pictures has got into event management also. What can we expect next?

Yes we had done Star Dust Awards and now we are planning to bring q new nonfiction for Mahua channel. But there is a separate non-fiction head for that.

Describe the following in one line.

titli22 8 years ago Thanx Star plus 4 giving such a good show.'Navya' rocks!!!Thanx Swastik pictures and the entire team of Navya.Shaheer and Soumya are doing a great job.No one could have portrayed Anant and navya's character in such a magnificient way other than Shaheer and Soumya respectively.This serial is very close to my heart.I cant imagine a single day without watching Navya.This serial should run atleast for 2 yrs.The story is so realistic even common ppl like us can relate 2 it.I am eagerly looking frwd 2 Anya's marriage.even family drama wud b interesting 2 watch if anya gets married.I want 2 c anya's married life and how navya adjusts in bajpayee family and win their hearts.

anyaRockz 8 years ago Navya is very close to my heart. I watch it for its freshness and touch to the real world. Request you to not make another stereotype saans-bahu saga out of it please !!! Shaheer /Soumya pairing is excellent !! No one could have justified Anant and Navya's role, the way these two guys are doing. A special mention to Shaheer's charisma !!!

phadukaran 8 years ago Phulwa started off good, then it went downhill, and it's still going strongly downhill,. Please show some positivity in the show,. thanks

Kayal_SHAMYA 8 years ago Fabulous siddharth... U r very true... Navya s part of every youngsters life today... I can't complete my day without navya..Thanks for giving abt navya...

A_Crazy_Leo 8 years ago Hey Mr Tewary, u really lost da concept of ur show midway. I hv bn religiously fllwing da serial widout missing e1 da repeats n wat do I get? Whr is da nayi soch now? Ya loads of naye sawaal 4 sure 4m us viewers.I really thot ur show 2 b diff., bt I see a real wastage of gud talents now.E1 b4 da lead pair had xprssd their luv 4 1 another U showed dem hugging n kissing n now dat they r ngaged 2 b maried thre is simply no romance? Wats da nayi soch, bro? U have cmpltly lost me. Pls dont do this . U surely will b losing da credibility of da show.

tv_princess 8 years ago we love watching navya..it hold special place in the heart of us fans...

Rachits 8 years ago I JUST LOVE NAVYA SERIAL VERY VERY MUCH , I M NOT MISSING IT SINGLE EPISODE.. LOVELY CONCEPT,, BEAUTIFUL STORY,,AND ITS SO REAL.. STAR CAST IS VERY GOOD... I LOVE SOUMYA & SHAHEER VERY MUCH AND WHOLE CAST OF NAVYA...THEY ALL R DOING FANTASTIC JOB...
SOUMYA'S ( NAVYA'S ) SIMPLICITY WINS HEART OF EVERY ONE..
BUT CVS HERE IS MY ONE SUGETITON PLEASE WORK MORE ON COSTUMES OF NAVYA AND ANANT... PLS DON'T REPEAT THEIR CLOTHS IN SERIAL ITS REALLY DOSEN'T LOOK GOOD... PLS I M REQUSTING U FOR THIS ...

Anu_XD 8 years ago What's up wit the Question : "The lead girl Jannat of Phulwa is said to be loaded with lots of attitude?"
She's just a kid!! o_O

sonal_luv 8 years ago navya is the best show...love it, admire it..

Sanjay Gagnani tests negatieve for COVID 19, to resume ...
5 minutes ago

Gurmeet Choudhary and Debina Bonnerjee test positive for ...
17 minutes ago

exclusive
Exclusive Saqib Saleem: It breaks my heart to see Bollywood's ...
58 minutes ago