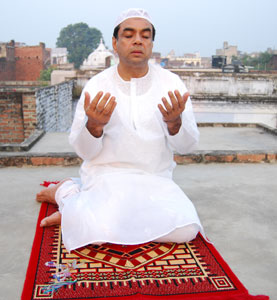 Paresh Rawal is the actor par excellence. Whether it is the role of a villain, comical character or a simpleton, he has delivered it with aplomb and ease. Getting under the skin of the character is very easy for him. Now after the recent releases De Dana Dan and Paa his forthcoming films are Road to Sangam and Rann. Both are from different genres.

In Road to Sangam, Paresh Rawal is playing the character of a devout Muslim and the film is resting on his strong shoulders.

In conversation with the versatile actor…

Q: How did Road to Sangam happen?
Paresh Rawal: When the director Amit Rai came to me with his script I just fell in love to it. I had given him exactly 10 minutes to narrate the story but once he started I sat through full two hours.  By the end of it, I was hooked to the character of Hashmat Ullah and said yes. This film has been a different experience for me.

Q: You have always been known as a versatile actor. What challenges did Road to Sangam offer you as an actor?
Paresh Rawal: Story was new, there are many pointers in story which touched my heart and the way the story has been told is unique. The topic of Hindu- Muslim people has been touched upon with a new found sensitivity. The topic itself has the power. This all charged me as an actor. In fact I had to go within myself to imbibe this character, his simplicity and strength. My theatre exposure came in very useful.

Q: Tell us about your character in film. Is it as strong as your character in Sardar?
Paresh Rawal: I cannot predict whether viewers will find it as strong as the character of Sardar Patel. But as an actor I know that this character may look frail but he has a lot of character and strength in him. I think that people should go and watch this film for its sheer beauty and treatment, the way it has grown. Whoever has watched it till now has carried it with them to their home. Viewers voted for this film as best film at MAMI. And I know that if ever another film of similar kind is made, as an actor I will always be ready to be a part of it.

Q: We got to know from your producer and director that you did not see the video in which they have captured real Hashmat Ullah's mannerisms'. Why?
Paresh Rawal:  Hashmat Ullah is not really a famous person and people do not know about his personality at all, so I don't need to learn his mannerism and don't feel the need to copy him. But what I need to do as actor is to catch spirit of the character, his mentality, what he thinks in certain situations as a normal person and how he will behave. As an actor I have to build that in my character, I have to create mannerisms for the character and that's the way I have been working from the beginning.

Q: What prompted you to work with debutant director and producer Amit Rai and Amit Chheda respectively? By the end of the shooting did you find them up to your expectation?
Paresh Rawal: Both are new but they are experts in their field of work. It was nice to work with them. The script and treatment of Road to Sangam is a challenge and anybody who has the guts to do such subject as their first film, has to be good. The end product is fantastic. We need to make this kind of cinema today.

Q: You too produce films and serials.  If Amit Rai had come to you to produce and act in the movie, what would have been your reaction?
Paressh Rwal: If he had approached me, then yes I would have made the movie, 100% sure. And if he wanted me, I would have acted too.

Q: Recently you have been seen mostly in comedy flicks and audience has enjoyed them. Why such a serious cinema?
Paresh Rawal: This is not true. I have done films like 'Oye Lucky Lucky Oye', 'Mumbai Meri Jaan', 'Firaaq', 'Youn Hota To Kya Hota' in which I am not at all doing comedy but playing serious character.

Q: Have not seen a negative Paresh Rawal since a long time. When can we expect one?
Paresh Rawal: Waiting for the kind of negative character that I would love to play and still find it challenging enough.

Q: How difficult was it to play staunch Muslim character?
Paresh Rawal: I am having a knee problem so it was difficult to sit for namaz shot but I managed it with sitting option.

Q: Do you think the absence of star value can affect a film's box office prospects?
Paresh Rawal: I don't think so. There are many films which had stars but did not work… like the recent example of 'Rocket Singh Salesman of the year'. It's up to audience, how they welcome a film. I feel people should go and watch this movie since we have worked from heart and too hard for it. It's entertaining and yet retains the original flavor.

Q: Road To Sangam has been appreciated in international festivals, how big an achievement is it?
Paresh Rawal: We should be proud that Indian cinema is getting more and more recognition at International level. I am definitely proud to be part of this movie.

Q: How was shooting experience for Road to Sangam?
Paresh Rawal: We enjoyed the outdoor location at Allahabad where the entire movie has been shot. People of the city were very lovable, cooperative and sweet, the shooting environment was so positive. All actors knew each other and enjoyed this time together. Om Puri, Pawan Malhotra, Javed Sheik, Swati Chitnis- we all had good time.