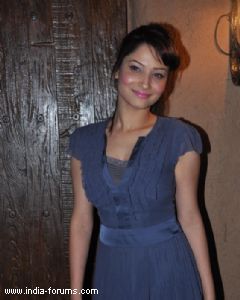 Popular TV actress Ankita Lokhande, who will feature in 'Halla Bol', an episode on child abuse, says every person should stand up against such a social evil.

The actress will share her viewpoint on child abuse in the upcoming episode of UTV Bindass' show 'Halla Bol', which narrates real life incidents of women heroes who have fought against injustice.

Ankita, known for her popular TV show Pavitra Rishta, will make an appeal to the young audiences to fight back instead of bearing the repercussions of child abuse.

"It is very important to take a stand in such situations," Ankita said in a statement.

Citing a true incident, she said: "Till today, I remember an incident about a girl in my school who used to be really quiet and aloof. As we got closer, we learned that her cousin would take advantage of her and that is when we asked her to take some action.

"Unfortunately, she did not do anything and hence, we informed her elder sister about it who brought it to her family's notice and he was sent to correctional facility."

On the show, Ankita spoke about the approach one should have to such happenings and urged the youth to bring about a change in their mindset and behaviour.

ahaanfan 6 years ago I second you Ankita..
Everybody shouod take strict actions against such evil deeds..
God bless u Ankita

star_wars 6 years ago Totally agree with Ankita Lokhande, people should always take a stand and speak out when they see such ills in society. God bless you dear.

SSRajput 6 years ago God Bless you Ankita Lokhande.. you are the best

Homely 6 years ago Love you Ankita Lokhande. God bless you.

sahana-naa 6 years ago Be the way you are Ankita. God bless you.

Rumi.. 6 years ago Hi! Ankita. You are too good as an actor.

loofa11 6 years ago Love Ankita Lokhande.. She is The Best..

Luvsushita22 6 years ago All the indians should stand against such act.. Great job Ankita Lokhande.

Alisha.. 6 years ago nice Show. Going to watch it for Ankita lokhande