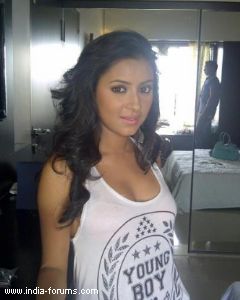 The talented actress Pratyusha Banerjee who rose to fame through her acting skills in Sunjoy Wadhwa's Sphere Origins popular daily soap Balika Vadhu on Colors and who was recently seen as a contestant in the reality show Bigg Boss Saath 7 is all set to do a Bengali film.

Petite actress Pratyusha will be seen taking a step ahead and is all set to enter into a filmy world. Thus confirming about the same, our reliable source informs us about the news saying, "Pratyusha Banerjee will be seen in a Bengali movie soon."

We were quite eager to know more about the film and her character in the movie, so we contacted Pratyusha Banerjee, who shares with us, "Yes, I have signed a Bengali movie. The shoot for the movie has not started yet. The shooting of the movie will resume next year in the month of February."

Furthermore we asked Pratyusha about her character and she says, "Well, I cannot disclose anything about my character at the moment. All I can say is that it is a women oriented movie and will pass a social message."

Well, as we all know that the popular reality show Bigg Boss plays a major role in the celebrity's life as they are also a contestant in the show. Even Pratyusha has been a part of this reality show this year too, so we quizzed her with a question on whether being a part of Bigg Boss proved her to be lucky or not because as soon as she got evicted from the show she was offered a movie and couple of shows on Television too. Giving an answer for the same she says, "Well, not just Bigg Boss but the other shows that I have done namely Balika Vadhu and Jhalak Dikhla Jaa 5 - Dancing with the stars have also helped me a lot. Whatever work that I do really matters to me."

When we asked her on whether is she looking forward to be seen in Bollywood too, she says, "Well I don't think much, I just take up whatever comes in my way. I don't plan things."

Lastly we asked her on when will we get to see her in daily soaps and Pratyusha simply says, "Well, no comments on it at all."

But well we are sure that her fans are eagerly waiting to see Pratyusha in a daily soap. Apart from this, we wish Pratyusha Banerjee all the very best for her future endeavors!

vibraj 6 years ago Looking forward to this film and hope,you win more laurels for it, Pratyusha Banerjee!

lishu_ 6 years ago I'm a li'l late to congratulate you for having this opportunity But My Heartiest wishes are with you.. Pratyusha Banerjee.. Wish you Luck...
May you get to showcase your Lovely Acting skills,May this movie be a Great Hit of yours and May you Emerge as A More finessed Actress after this movie!
Love!

LiliWorld 6 years ago Pratyusha Banerjee you are talented and beautiful and this is a great news... I'm sure you will be great in it!

lifelessons 6 years ago Pratyusha Banerjee you are an awesome actor...I am sure you will do wonders

Sneha.Love 6 years ago I am so happy to hear such a great news Pratyusha Banerjee. You are talented and awesome actress and I am sure the movie you make will be a great hit. Love you dear, wish you all the best.

yzyz 6 years ago Wonderful news Pratyusha Banerjee, your talent will certainly be enriched with new experience. May all your wishes come true.

VerboseG 6 years ago Pratyusha Banerjee is the best. I wish her luck and joy in everything she does.

randayn 6 years ago Wish u all the best Pratyusha. Though I don't know Bengali but I will still watch the movie. Just report the release pl. Hope to see u on TV too. And Bollywood of course. Love u princess.