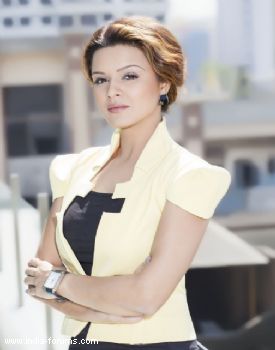 With nearly 13 years of TV career, actress Aashka Goradia has garnered all the fame for personifying her roles with precision. Yet she never left an urge to be different. And following the same, Aashka will now be seen educating and helping people regarding their personal finance through TV18's recently launched Gujarati business news channel CNBC Bajar's show Get Rich With Aashka.
We quiz her about the concept of the show, and Aashka explains, "Well... I don't have lottery here," she laughs, adds, "It deals with personal finance. We educate people on managing their financial issues and other financial technicalities, and making investments at the right time."
How are the people selected? "We pick up a case study and talk to that particular family by going to their home... understanding their life, helping them. The most interesting fact is this isn't a studio based show... it's an interactive one."
We hear that you will be anchoring the show. "Please don't tag me as an anchor or host here. It's my own show and I simply want to do it in the best way," she asserts.
Interestingly, Get Rich with Aashka will be aired in Gujarati. Don't you think language might cause a little problem for your non-Gujarati fans? "With Modiji becoming the Prime Minister, it feels like Gujarati has become a national language and has spread in every corner. Business means gujju and gujju means business. So, I don't think there will be any hindrance in comprehending Gujarati," remarks Aashka who is also a Gujarati.
This isn't the end. Aashka is also the face of CNBC Bajar. Sharing her excitement, she says, "I'm simply honored and proud to get such a huge opportunity. Besides, I'm thrilled to get a mentor like Sanjay Pugalia. If he wouldn't have been there, I would not have taken this." Sanjay Pugalia is the editor-in-chief of CNBC Awaaz and CNBC Bajar.
Though Aashka has been an entrepreneur for a long time, we understand that such shows require huge research and preparations. So, how has been her groundwork? "CNBC and its entire team helped me by elaborating about the details. Even Sanjay sir guided me in preparing for this show," she replies.
Though the promos of Get Rich with Aashka are on air, the show will begin soon. Currently, Aashka is also working on the historical feature drama Bharat Ka Veer Putra - Maharana Pratap.
Good luck, Aashka!

6 years ago You are doing a wonderful job in Maharana Pratap.

6 years ago Maharana Pratap is a great show !!

6 years ago All the best for your new project, Aashka Goradia.

+ 4
6 years ago Its interesting to see how Aashka is always on a different path of her own. Taking on a gujrati show as an anchor is challenging. Good luck to her...

+ 2
6 years ago No one cares !!! It's funny cause people forget how much of a ego this girl actually has.

Wish they had picked someone better