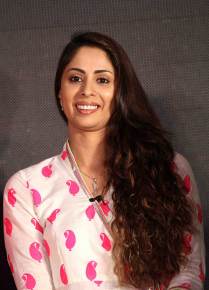 With Sony TV's Kehta Hai Dil... Jee Le Zara, it was a second innings for the bong actress Sangeeta Gosh who played Sanchi in the show. Though the serial failed to grab much needed TRPs so the channel decided to wind up the series.

When quizzed Sangeeta about her plans post her show wraps up, "Well I'm going to Rajasthan and then Srinagar with my husband. I am going to take a month long break only in Rajasthan then will take off to different place. We never decide, just pack and leave," she says.

Talented actress will now give time to her family and relax with them as due to her shooting schedules she could not do so "I couldn't give time to my family due to my work schedule so now when I have it, will enjoy to the fullest. Will roam and cook food which I missed the most. Even when I use to get off from the shoot, I use to cook at home."

So are there any plans of returning to TV soon? "Look it all depends on what kind of offers I get. Definitely it has to be in a good channel and a woman oriented character. I've a simple logic; if I have to stay away from my family due to my work then it has to suit me creatively and economically. I don't mind whether it's negative, grey or a comedy shade, I should like it. Usually the show starts on a different note and ends on a different one, just like Jee Le Zara. So let's see what is in store for me," concludes Sangeeta.

For now its vacation time for the actress. And we hope to see Sangeeta back on screen soon.

waiting to see you on tv again

ishibaby 6 years ago I WILL MISS U. COME SOON ONSCREEN AGAIN.LUV U.

6 years ago Please take up with a reliable tv channel in future...enjoy your travels and be back with a great project!respect you as a amazing artist!

6 years ago all d very best for your future projects..will b waiting!
enjoy your holidays...keep smiling

6 years ago sangita..i will miss you badly..waiting for your next project .. enjoy your holidays...keep smiling

6 years ago Hope you enjoy your travels. You are such a beautiful person and deserve all the happiness in the world. Hope to see you soon on another amazing program like JLZ.

6 years ago All d best for ur future projects :) njoy vacation :)

6 years ago Enjoy your vacation...but please do come back to screen...will miss your presence...you made me watch Hindi serial for the first time in my life.saachi has become a legendary character