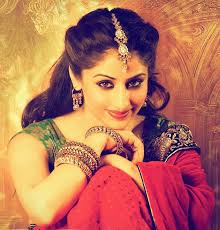 Pretty lady Laila with her vicious mind has made her come back on the show Rangraisya on Colors. Playing Rudra's (Ashish Sharma) lover Laila (Ankita Sharma) was a beauty with a deadly mind in the show. For some time her character was absent from the scene and now just as Rudra and Paro (Sanya Irani) are coming closer she is back with a vengeance.
We talk to the lovely lady and ask her what kept her busy all these days? "Well, I was busy with my Telugu movie wherein I have the main role and at the same time the channel too had decided to keep me away from the show for sometime so it worked well for both of us."
Talking about her comeback Ankita says, "As of now I will continue to be negative on the show and be a nuisance who will try to create problems for Rudra and Paro. If this track works then probably that is what will be continued since these days everything depends on the TRPs."
After playing positive lead roles in shows like Baat Hamari Pakki Hai and Amrit Manthan, she is playing an all-out negative role in Rangraisya. It was a conscious decision to do so says Ankita, "After playing positive I wanted to do negative and this was a good opportunity that came to me. Even people have perception that after playing a positive character one cannot portray negative and I wanted to break that myth. Also as an actor I was craving for some creative satisfaction to try and portray all type of shades out of which negative was one and I am lucky to get to play Laila in Rangrasiya. I am also doing this show because of producer Saurabh Tewari with whom I have worked earlier too when he was with Imagine TV. He is exceptionally creative and talented as a writer and producer and I had complete faith in his potential."
Ankita is also happy that her fans have liked her new avatar, "After I got this role I was a bit apprehensive about doing negative but then I was sure also that I will carry it off very well and now I am shocked with the response. I think the audience has become very smart and intelligent these days and I am very happy that they have accepted me in this shade."
Her beautiful looks have garnered lots of appreciation for Ankita and also offers that keep coming her way. So is Bollywood on the cards? "Yes, I would love to do Bollywood films but then things take a lot of time to happen in Bollywood. In the meantime I am happy to be doing the main lead in the Telugu film and then there is Rangraisya too. I am content with what I am doing now and am totally committed to these two at present and will think of taking up anything else after finishing these projects."
Well, all the best to you Ankita.
Seema Khot Mattoo
0 Likes

Haridas 5 years ago Ashish Sharma this waiting is getting too long. Pls come back soonnn...

aravapalli 6 years ago which telugu film is she acting in?

leenu 6 years ago Sanaya irani n Ashish sharma you both rock in Rangrasiya...

chandana.s 6 years ago Love u Sanaya irani , u r the best...

luvarshi 6 years ago you are so pretty and talented ankita! my best wishes to you

mansaj 6 years ago The whole team of Rangrasiya is talented.
Sanaya Irani,Ashish Sharma are the best.