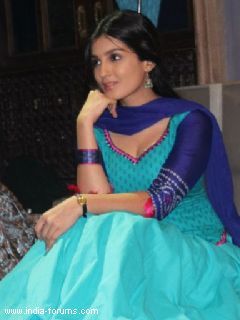 Pretty actress Shiny Doshi who plays Kusum in Sphere Origins' popular show Saraswatichandra on Star Plus clarifies her stance about quitting the show. It was reported by the media that the actress is quitting the show owing to an issue with the director of the show.

When TellyBuzz spoke to Shiny to hear about her part of the story, she declined the news stating it as rumor.

She is thankful to the production house  as she has enjoyed her journey thoroughly as Shiny says, "Saraswatichandra is a great show and it has been a great journey for me so far. It's a good production house to work with and I understand that sometimes as actors we have to wait for our scenes and I have never created any issue for that. If I have to wait for my scenes to come then I am always informed that I have a gap of these many hours so that I can plan things accordingly and get back to my scene."

Shiny wasn't shooting for the show from past few days. When we quizzed about that to her, she shared, "I have been absent from the show for some days because my sister in law delivered a baby so I had to go to Ahmedabad to meet my family on this joyous occasion. That time the production house co-operated with me very well. They had to show important scenes where I had to be there but still they shot the scenes without me. I have never had any differences with the director or any other person on the sets."

"I don't know that from where these rumors are circulating. I haven't quit the show and I am shooting for the show from past 3-4 days. We work happily on the sets and the workplace on which we have to work has to be lively. Those kinds of issues never happened and I have never ever thought of quitting the show. It's all just a rumor and I have no idea from where these rumors came from," concludes Shiny.

sjj23 6 years ago
well someone have twitter ID but never use to clear anything there regarding show or if show viewers in fact need to know anything. yeah if something else then it is to be clear in a day, who knows what for! may be think arey how they get to know all this and i now need to hide by other stuffs so may be for this. but when it is show concern then sometimes even after month or try to clear may be for co-star as co-star has very much concern for show regarding things or may be had to clear by media's so much question.

rimis 6 years ago glad she cleared it!
couldnt imagine a change of actors in the middle of the story..
i hope they clear the rumors about the show ending as well

mix_of_emotions 6 years ago ok someone asked wht grt rumours were cleared to i wud suggest go through all articles rajbaddhan twittetr sbs sbb ivs of sc team and thier leads once since start of show.and if u dont get then i will give the links wher directly rumours were cleared by actor whether they are regarding show,regarding costar,personal questions or regarding show..i know smtyms rumour was cleared at quickest tym n some tyms delay happened in clearing rumours tht tym but depends on how active u r on line and how fast u get to know abt the rumour and plus when u will be questioned then only u will give ans.but ther is a notion when will rumour start without patience without full knowledge the bashing starts then statement comes and ppl get quietened.
in earlier article it was said shiny stopped cming to shoots.so when will she will come to shoots this wud be first ques thrown at her..anyways iam happy she cleared it thts it.
now nexttym if somebody has to ask me ques plzz do it in pms plzz as the limit of here cmmnting is over for me.
well any taunts bashing which will come to me are welcome.

green_tea 6 years ago it's quite obvious something happened, as she doesn't completely deny it, rather she plays it down. but i would be annoyed too if i had to wait around endlessly when i could be doing better things, so i don't blame her for wanting to quit. the show will probably go off air soon anyway, so not much longer to wait, shiny!

x-affy-x 6 years ago Journalism for the good of everyone is going out of the window
All we hear about is negativity on the sets. I mean a positive article won't hurt anyone. Its good shiny has cleared it.

MrDarcyfan 6 years ago There is never smoke without a fire. I am sure some drama must have happened with the director. Most workplaces have issues and this will be no different. But people just get on with it. Good on Shiny for giving the clarification regarding her status on the show.