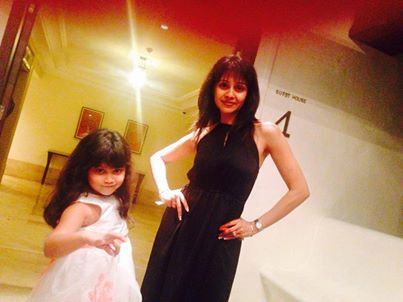 Beautiful and talented Manasi Salvi who is currently seen as Avantika in Star Plus' Pyaar Ka Dard Hai...Meetha Meetha Pyaara Pyaara... has given herself a new year's gift with a new hairdo. She talks about the reason behind her latest hairstyle, why is she not quitting the show and much more in conversation with TellyBuzz.

Manasi likes to experiment with different looks and different hairstyles. As seen in the show the actress looks pretty and petite with her new hairstyle which also suites her character, "It was not a production house's decision but my decision to get a new haircut. I wanted to try something new in 2014, thus I decided for a new look all by myself. Also the hairstyle suites my on screen character well," she states.

The actress seems to be a doting mother who followed her daughter's footsteps to have the similar haircut matching with the li'l one's and Manasi says, "Actually my daughter has a same haircut and it was she who told me that mom I want you to look like me'. It was very sweet of her as normally child says that I want to look like you but here it is the other way round. How could I say no to her? So I give credit to my daughter for my haircut."

As we had earlier reported that the charming actress is all set to bid adieu to the show Pyaar Ka Dard Hai...; when asked Manasi whether is she still thinking about her decision or not, she clarifies saying, "Well yes, I remember but now I'm again in talks with production house for the same. As of now my last working day would be 31st January. Nothing is confirmed so I can't talk much about it but the day it gets finalized, I would let you know."

Being busy with a daily soap Manasi wants to go on a break to relax and post her break the actress would look forward to comeback on TV, "Currently I'm just looking out for a break. I want to relax for a while and then come back again on television. So let's see what happens with it but I am very happy with my new look and hope my audience likes it too," Manasi concludes.

Well, it was indeed very cute of Manasi to get a new hairstyle and we wish her good luck!

ahaanfan 6 years ago Really really love u Mansi..one of d best actress on Indian Television..ur daughter is so cute

NeanderthalGirl 6 years ago Love you manasi!! Whatever be the haircut...you always look gorgeous and beautiful!!! You are the most stylish lady in pkdh!!!!!!!

meghu2000 6 years ago Love you Mansi.. You are an amazing actress.

Tacker_Holic 6 years ago Love you Manasi! You are classy, elegant and talented!

sanw 6 years ago Manasi just looks awesome with her new hairstyle...& love her for her great acting

Budtameez 6 years ago Manasi is easily the sexist lady in 'Pyar Ka Dard'!
#
Manasi is not only beautiful but she is also very talented, Manasi deserves *****!

parii2 6 years ago plz dnt go plz plz plz..ur the USP of the show even more than the leads..for me atleast..plzzz