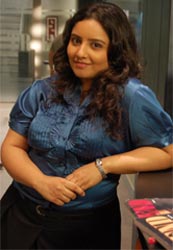 Pushtiie, the protagonist of YRF TV and Sony TV's Mahi Way, throws at us a lot of surprises. Behind the chubby, happy-go-lucky exterior is a Reiki grandmaster. Here she talks about how fitting in has always been a problem for her. But it didn't stop her from believing that she'd get the best of life just that way!

First and foremost, are you actor Vrajesh Hirjee's sister?
(laughs) Yes, I am.

Does it help to be Vrajesh's sister?
Being in the same profession is really helpful. I don't need to go and ask anyone else for help. He is an encouraging and supportive brother.

So did you consult him before signing Mahi Ve?
No, he was travelling at that time. So Mahi Ve was pretty much my own decision (chuckles).

Were you keeping yourself busy with ads or theatre after Hum Paanch or you took a break?
I took a proper break for about five years. I was in Goa, teaching and healing people.

Wow! How did your parents and brother react when you stepped into this very unconventional profession?
At first they were all like- Okay…what is wrong with you? Then they saw that there are actual results to such methods and slowly understood why I was doing this. And I think my mom always knew I had something special in me. Because whenever she would complain of aches I would ask her to sit down for five to seven minutes and channelize my energy towards that point. She'd end up feeling fine for two weeks.

And after that?
After that it would start again. Because one sitting is never enough. You have to continue till a specific time like any normal course of medicine.

What kind of qualification do you need to take to become this kind of a healer?
Well, I'm a Reiki grandmaster. I got trained under the person who taught me meditation. Swami Akhil Saraswati and Maa Divya.

Now that you're acting do you miss your alternate profession?
Sort of... I am continuing it but the frequency is less.

How much do you enjoy your present job?
Loads. Because this is a role that I've always wanted to do.

What makes Mahi so special?
She is someone who epitomizes everybody's insecurity. She is a normal simple girl. She has her dream man. But she doesn't vie for acceptance from society. Instead she wants the society to accept her for what she is.
But what makes Mahi very very special is that I feel I'm a source of mass healing. People have been telling me how after looking at Mahi, they now don't feel the need to change. They are not what the society defines as pretty or beautiful. But now, they look at themselves in the mirror and with a smile say that's me. Because of Mahi, these people have the guts to live their life in their own terms. She has made them love themselves for what they are!

How is your time on the sets?
Awesome! I've never worked with such a beautiful group of people before. Everybody stands up for each other here. If anyone needs any help, it requires just 3 seconds for everyone to come running and offer to help. The kids call me Didi and Maasi off-screen too.  And Daadi calls me Mahi. It's nice!

How much do you relate to Mahi?
A lot, although I have to agree that there was a time when I thought – hai main toh bahut moti hoon (oh! I am very fat). When I was doing theatre, many people would come to me and say you're so pretty but I wish you'd lose some weight. That irked me. Then I thought- But this is who I am! Why can't you like me this way?

Even Vrajesh is not what you call a macho man, so did he understand what you were going through?
Yes, in fact when I'd decided to quit theatre he was very upset. He told me, wait patiently. Everyone doesn't have so much talent as you. You will get what you're looking for. I became what I am today without ever having to change! So will you.

You had stated you'd always known you'll become a lead actress…
Yes, it happened during one of my manifestation sessions after I quit theatre…

Manifestation?
It's where you bring out your deepest desire to the fore and say it out loud.  So during one of those sessions, I'd declared that I'd bag a leading role in a YRF project.

But at that time YRF TV wasn't even launched?
Yes, so I told it thinking YRF movie (laughs). I wish I'd been more specific. I should have said- I'll bag a lead role in a YRF film (laughs). Next time I'll do just that!!

12 years ago u r doing great job as Mahi . u r very sweet . like u jaise app hai

+ 3
12 years ago wasn't she in Kkusum back in the earlier episodes of the show. She was her sister-in-law or something. Kkusum's husband's sis. And I know she did the role of Candy in Ishq Vishk. She's so sweet! I didn't know she was Vrajesh's sister! :)

12 years ago i'm liking Mahi ve...it is different from all other shows...