Q: What's your role as the brand ambassador of hockey in India ?
A: I'll be present at all major hockey matches that India plays and travel to promote the game. I will also shoot a national song and try to get my friends from the film fraternity to attend matches, as and when convenient to their schedules. This was decided two months ago. After watching "Chak De, India!", I feel Shah Rukh Khan would have made a better brand ambassador of hockey than me.

Q: Did you have any apprehensions about hosting television show "Biggest Loser Jeetega" on Sahara One?
A: I'm shy by nature, but I'm very comfortable hosting this show because it's about health. I've been into martial arts and have trained thousands of students, including bouncers for many security agencies and Bombay police. So the only times I felt awkward were during the interactions. There's plenty of talking on the show and it's all in Hindi. I make grammatical mistakes since it's not my spoken language. Being a South Indian, I have little hold over Hindi. But then, I wonder how many Hindi-speaking people can speak Tulu?

Q: What about "Biggest Loser Jeetega" appealed to you?
A: For me, it was complete entertainment. It's truly a reality show without any gimmickry, no show of skin and no foul language. It's not about beauty. Yet, you will notice that most of the contestants have got a wonderful smile. There is a definite lack of awareness about health issues in our country. We're ignorant about what we should start with -- dieting, working out or walking. I was on a sabbatical from films and the reality show was a perfect vehicle to impart all that I know about health to make a positive difference in other people's lives.

Q: Were celebrities eligible for participating in the contest?
A: No. Celebrities throw tantrums and wouldn't have pushed themselves as far as these contestants have. Rumours were doing the rounds that we had approached celebrities and they refused. Well, I don't need them, they need me to lose weight. They would fake tears and insist on camera angles. This show is about common people, who are raw and won't fake emotions. We had gone to Adnan Sami to ask him to contribute in making an inspirational song for us. But he was already losing weight then.

Q: Is it not difficult to lose weight in a controlled environment ?
A: There is a room filled with goodies in our show. There is a chocolate room open 365 days a year with more goodies than InOrbit Mall has. The contestants can cheat. With the knowledge we've imparted to them, there's no way they would go back to their old lifestyle. 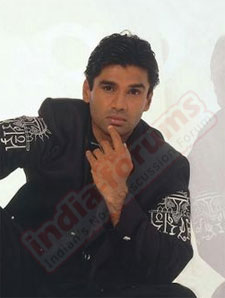 Q: What's your family's reaction to the show?
A: Mana, the kids and I watched an entire season at one go. We were laughing and crying all the way. My son has started looking at his podgy friends differently and guides them with their diet. So, I'm happy that we've already started influencing people.

Q: What's the secret of your fitness?
A: Discipline. I eat breakfast like a king, lunch like a prince and dinner like a pauper. I drink plenty of water, get almost eight hours of sleep everyday, I run, climb stairs, walk, play cricket and go to a gym or work out for half-an-hour daily. I love my desserts once a week. When shooting a film, I rehearse like a dog for my action and dance scenes to burn calories.

Q: How do you view television today?
A: It's an awesome medium, especially for reality and sports. It's also very tough if one is part of a daily soap. Everyday you hear about someone or the other fainting on the sets. I can understand the constant pressure on the actors. There is so much competition, but I'm enjoying my stint on the small screen as of now.

Q: How did your partnership with Ekta Kapoor come about?
A: I met Ekta for some work. The love and respect she gave me was amazing. The first thing she said to me was that she had often told her father that she wanted to work with me. She's an achiever at such a young age and yet she is so humble. It's my privilege to work with her. We're doing quite a bit of work together.