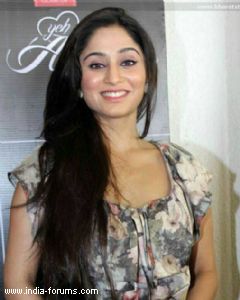 Soumya Seth was last seen on Sony TV's Dil Ki Nazar Se Khoobsurat but after the show went off air, she was out of the lime light for a long time. We caught up with Soumya Seth to know about what has been happening at her career front and bit about her personal life.

The pretty actress Soumya Seth has been absent from the TV screens quite some time now and says that she doesn't feel like working, "Yes, since seven to eight months I had been out of action from television though recently I did an episodic for UTV Bindass' Yeh Hai Aashiqui. I don't know why but these days I don't feel like working."

After having shown her acting skills in various shows, Soumya is not in a hurry to take up offers. She wants to portray different and powerful characters on-screen as she says, "Well it's not that I completely don't want to work but I am not in a hurry for it. Actually I did get few offers for the shows and films too but there was nothing that excites me. Also I don't know of what kind of roles I would like to do as every time it's the god's grace that I get different and powerful characters."

So are there any chances that the viewers might see the actress portraying a negative role? This is what Soumya tells us, "No, I would never do a negative role as I think I'm not meant for that. I feel that I'm the princess and was not born to work but to perform and love people."

When we asked Soumya about is there any insecurity in terms of her career, she replies, "Not at all... as I know what I'm and I will remain the same even if I don't take up any show. Sometimes my dad does tell me that you should work or you will rust (giggles) but even he knows that I will only work when I want to."

7 years ago please soumyaji take up some good work..wanna see u badly on screen now

monayarocks34 7 years ago miss you soumya seth...come back for your fans who miss you lot.

7 years ago Soumya Seth come back with bang..we support u no matter what.

7 years ago miss u onscreen Soumya Seth...enjoy ur break and come back soon wid a banggg :) loadss of lovee :)

monayarocks34 7 years ago love you so much soumya seth.
come back soon we r waiting.

RushiSoumya 7 years ago Soumya Seth miss u loadsss..hope to see u onscreen soon :)

7 years ago Hope very soon Soumya Seth ll get her dreamrole..Love u Princess :)