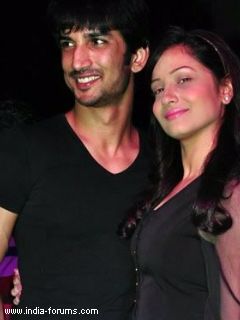 At an event held for the success bash of the superhit movie Chennai Express, we spotted the gorgeous actress Ankita Lokhande with her beau Sushant Singh Rajput.

We caught up with them and in a freewheeling conversation with TellyBuzz Ankita spoke about her show Pavitra Rishta where she is now playing a double role, about the movie Happy New Year which she was offered, and also about the recent rumors that are floating around about Ankita slapping Sushant...

Ankita acknowledges that she was indeed offered the lead in Farah Khan's film Happy New Year but has no clue as to what happened next, "I really don't know what happened to the movie offer. The news was very true that I had been offered and was considered for the movie Happy New Year. It happens many a times that things don't materialize at the last moment and something similar happened in this case too."

Further she elaborated saying, "It is really difficult to juggle from one character to another. But I am trying and working on the same and giving my best."

Ankita who comes across as no nonsense person doesn't mince words when she is asked about the recent rumors floating that Ankita had slapped her beau Sushant Singh Rajput in public. Rubbishing the rumors she said, "Those are absolutely baseless and false rumors that are floating around. The source who has spread the rumor is absolutely wrong. I can never ever slap Sushant in my life"

Joining the conversation in between Sushant Singh Rajput too quipped, "Mine and Ankita's relationship is much sorted and hence people are very much interested in spicing it up in a wrong way. I just ignore these kinds of rumors."

Move on guys... this couple is very much in love and want to stay that way!

7 years ago Have a safe and wonderful weekend Ankita Lokhande.

vinusushita 7 years ago Stay forever together Ankita n Sushant.Love u both.

7 years ago All the best to Ankita Lokhande and Sushant Singh Rajput.

bollywoodwala 7 years ago Not only Ankita Lokhande.. i guess no female fans of sushant singh would ever slap or not even like to see getting him slapped by some one. Am i right ladies? :P

7 years ago wonderest couple in d worlds love u SuShIta...

+ 2
7 years ago What an awful rumor. Glad Sushant & Ankita cool with it & continuing with their relationship!

+ 2
7 years ago Ankita and Sushant, good luck with your future! Ignore the rumors and and continue with your lives. People are just looking for reasons to create drama where there is none.