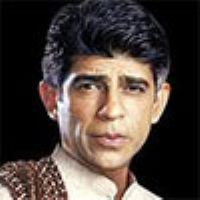 Talented actor Ritu Raj Singh who was last seen playing Inder Sharma in Zee TV's popular show Hitler Didi, is now seen playing a different character in Colors' recently launched show Beintehaan. Rituraj is playing the character of Alia's father Gulam in the show. TellyBuzz spoke to him to know more about his character in the show.

Talking about his character, Ritu Raj told us, "I am playing Gulam in the show who is Alia's father. He is a very simple person. He is rich from heart and loves his family a lot. He is like a joru ka gulam. I haven't got this kind of a role to play and I am quite excited about my character."

He further added, "I have played negative character earlier and I have enjoyed it too. This character is very much different from others as it has lots of feelings and emotions. I am feeling happy to play this character. I always wanted to play different kind of roles and luckily I have got this character. I am working with Colors and Farhaan for the first time and he is a very good writer. I hope that the audience will like it."

When asked Ritu Raj about working with Preetika Rao and Harshad Arora, he added, "Preetika is a lovely girl. Though I have not got many scenes to shoot with her yet but whatever scenes I have done with her, I felt lovely. I have lots of hope from her as an actor. She expresses her feeling so well which looks natural on-screen. Harshad is a lovely guy to work with as well."

Well, we also hope that the viewers like Ritu Raj's acting in the show Beintehaan and appreciate him for his acting skills.

-.serendipity.- 6 years ago Beintehaa is amazing! Preetika Rao and Harshad Arora are doing an amazing job!!!

Angelicprinces 6 years ago loved him in Hitler Didi.Such a powerful actor.

PERFEQXION 6 years ago This show is great. Best wishes to Team Beintehaa.

YaGunnersYa. 6 years ago All the best to the whole team of Beintehaa!! Loving the show so far!

Divineluster 6 years ago All d best rituraj ji...loved u in hitler didi...

manesha76 6 years ago All the best to whole team of Beintehaan !!!
Harshad Arora and Preetika Rao nice Jodi !!!