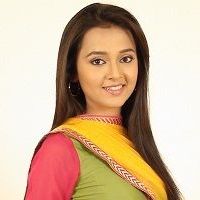 There is a twist in the tale which will be introduced in Swapan Waghmare's popular daily soap Sanskaar - Dharohar Apnon Ki Hai which airs on Colors. With the new entry of Pooja Kanwal who is seen playing the role of Deepika, the track of the show is seen becoming even more interesting which is keeping theviewers glued to their television screen.

But well as per the storyline we saw that Dhara a.k.a Tejaswi Prakash Wayangankar is the lead of the show. With Pooja Kanwal's entry in the show as Deepika who portrays the role of a parallel lead in the show, the entire focus is now seen to be shifted on her and it seems that Deepika is now the main lead of the show.

On the same we got in touch with Tejaswi to clear the confusion about who is the lead in the show and she shares, "I am only the main lead of the show. The character of Deepika is very strong and she is currently portraying the parallel lead. She is bringing the much needed twist in the show which will boost up the storyline of the show and will make it even more interesting for the viewers."

Deepika a.k.a Pooja Kanwal's entry will create a twist in the tale in the storyline, "I am very happy with Pooja's entry in the show. She is going to be bringing spice in the track of mine and Jai (Jay Soni). Dhara has so far not realized that she loves Jai in the show, but she has started feeling a bit bad for Deepika and Jai's marriage but she doesn't know yet for what," replies Tejaswi.

As seen in the show Dhara who is a very good friend of Jai has not yet realized that she has started liking Jai. But soon due to the closeness of Deepika and Jai she might fall for Jai. Adding more to what she has said Tejaswi maintains, "Dhara has not shown my feelings to Jai as yet as she is shown to be confused. Slowly maybe the insecurity of Deepika getting close to Jai will make her realize that she loves him. Let's see ahead how the track of the show shapes up. Lots of twists and turns are coming up ahead in the show."

As we see in the show that Deepika is Ketki's sister. Ketki anyhow wants to get her sister married to Jai and hence she tells her to behave like Bhoomi so that Jai falls for her and furthermore there won't be any complications in her marriage along with Jai. Jai who loved Bhoomi very much is still in love with her and can't fall for any other girl. But at the insistence of his family members he is all set to marry any girl, just to see his family happy.

So will Ketki succeed in her plan of getting Deepika married to Jai? Will Dhara be insecure of Deepika and won't like to see Jai and Deepika getting married? To know more keep reading TellyBuzz.

7 years ago Good Morning Jay.. Have a Beautiful day ^_^