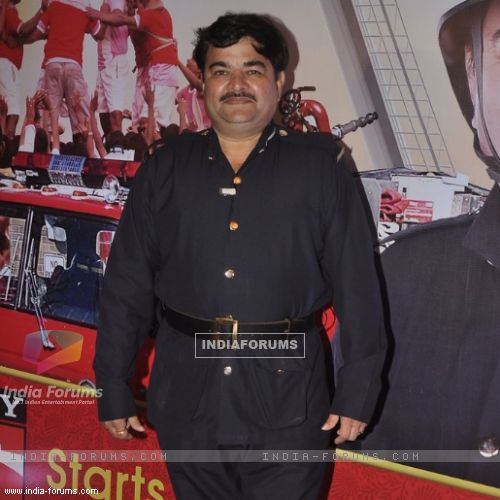 Like earlier reported by TellybBuzz that SAB TV is coming up with a new show with altogether new concept Chandrakant Chiplunkar Seedi Bambawala. We got in touch with Prashant Damle who is a veteran Marathi theatre artist and Marathi television actor who has won millions of hearts of the people through his act in regional shows and films. This is the first time that he has taken up a venture for Hindi GEC.

TellyBuzz got in touch with Prashant to know more about the show and the character portrayed by him.

What made you opt for a show like this?

This is a very important show for me because this show has a very unique concept of 'Fireman'. And a show like this with a subject that is based on fireman is never seen before on Indian television ever. Since the inception of television series, I do not think there has been any show or any kind of episodic based on this kind of concept. When Dharmesh Mehta (Producer of Chandrakant Chiplunkar Seedi Bambawala) narrated me the script and story of the show, I thought to myself this is something I have to do and I cannot let it go.

You have done many shows and theatre (dramas) with Kavita Laad. How is your chemistry with her for this show?

My chemistry with Kavita is absolutely perfect. We have done around 4000 shows together. So be it on the stage or off the stage, our chemistry is superb. The major reason behind this could be the way we understand each other and the kind of bond we share. I strongly believe you need that perfect chemistry for comedy. Comedy requires that chemistry. To get that correct action, reactions to the actions and the perfect timings can come out only if you have a very good chemistry with your co-actor. I am glad that we share an amazing rapport with each other.

You are extremely famous for your comedy. Tell us how different this comedy is from other comic roles that you have done.

Comedy changes with the change in the profession of the character. Comedy is one such genre which has a huge amount of scope. If you are portraying a doctor as your character or role, the way you will play with that comedy is different. Here, we are coming up with a concept of Fireman, so this will definitely have serious and clean comedy. The line of comedy which this show will have is different. This man, Chandrakant Chiplunkar can never say 'No' to anyone. He has this habit of agreeing to everything what people ask him and tells him to do. All the problems that come his way due to this peculiar habit is the line of comedy in this show.

What do you have say about the huge ensemble cast?

My equation with each one of my team member is very nice. It is all about team work. If you work in co-ordination and help each other out, that will reflect in your work and audiences will be able to connect easily. Our director of the show is the captain of the ship and he is doing his job extremely well.

Lastly, any message to your fans? For the first time ever you will be seen in a Hindi GEC.

Chandrakant Chiplunkar Seedi Bambawala is that show which can be seen by everyone. The best part of this show is that it has clean comedy and caters to all age groups; be it kids to adults to senior citizens. So do watch our show and love us.

Team TellyBuzz wishes all the luck to Prashant Damle for his upcoming venture.

Renu111 6 years ago wow prashant damle is in hindi...all the best sir ...ur chemistry with kavita lad is best.

alokyadav 9 years ago I am Alok kumar yadav

I am your fan

paulsibila 9 years ago HAPPY BIRTHDAY, GOD BLESS YOU WITH LOT OF HAPPINESS.

Nikhi. 9 years ago Wishing you a very Happy Birthday Arbaaz!

ramishamalik 9 years ago HAPPY BIRTHDAY ARBAAZ,,,
May God give u more happiness in u r life,,& u r all wishes come true!!!!

sidlover4lyf 9 years ago HAPPY BIRTHDAY ARBAAZ :) Hope you have a Great day x :)

zara_11 9 years ago Happy birthday to you Arbaaz, may all your wishes come true.