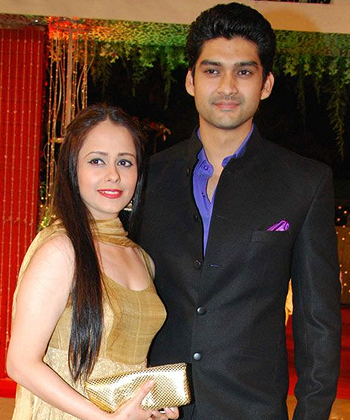 Television's one of the most adorable couple Aditya Redij and Natash Sharma who have tied the knot recently talk about how their life has changed post marriage; the responsibilities they have to take care off and much more in conversation with TellyBuzz...

As we know the couple tied the knot secretly without letting people know about their nuptial vows, when asked the reason to Aditya about the same, he states, "It was not a secret but nobody asked us of when you are getting married. If I was asked a month back, I would have told you that we are tying the knot on this particular date."

Post their marriage Natasha says that life has become beautiful and more responsibilities are added up, "It has become more beautiful and more responsibilities are added up now. Now it feels like you are living for another person and it's a great feeling. Aditya is also quite happy and respects me more as he says that 'Now we are married and I'll respect you even more'. I feel the mantras have added the magic in our relationship."

On being asked to Natasha about their honeymoon plans, she replies, "We haven't yet planned as we are still in Kolhapur. There are some more rituals and pooja left and once we complete that; we will return back to Mumbai. It might be in two or three days and then will decide of where to go."

So are Natasha and Aditya planning to throw a reception party for their friends and family members in Mumbai too? This is what Natasha says, "No, there are no such plans. We had called all our friends here in Kolhapur for the wedding. We had a gala time during all the rituals before and after marriage."

Presently Natasha wants to look after her husband and her home and says that in future if she gets any good offers she will take them up too as she can manage things simultaneously, "Well Aditya wants me to stay back at home and take care of him. However, even I think the same and if something good comes up, I will take it. I've never gone out and asked for work and will not do so. I don't mind staying at home and taking care of Aditya but at the same time if I get something good I would take it and I know that I can manage both. I'm a multi-tasker."

We wish both of them a happy and a wonderful married life!

.albatross. 6 years ago A hearty congratulations to them both. And hope to see Natasha and Aditya on our screens soon. :)

--Saina-- 6 years ago Congrats and wish you both a very happy married life..

Raj_preet 6 years ago Congrats Aditya Redij
You are the best

have fun and hope to see u come back in a new serial..

fm05 6 years ago Many congratulations to the cute couple.
Always pleased to hear of a couple getting hitched. If it's real love than commit and increase the respect in the relationship. Seems Aditya agrees as she said he respects her more. Hope to see Adi back on TV after his well earned break. He rocked in Junoon!

awida 6 years ago We love you Aditya Redij. We wish you all the best in both personal and professional life.

Marathi_Mulgi 6 years ago Congratulations to Aditya & god bless you.
Thanks IF/TB for article