View Profile
Rucha Hasabnis made her mark in the industry with her popular show Saath Nibhana Saathiya on Star Plus. When the show took off never did the viewers expect the show to become number 1 one day.

Rashi, being a negative character, is loved a lot by people for her hilariously tragic acts which she plots against Gopi that eventually falls her.

In a candid chat with Telly Buzz, Rucha Hasabnis speaks about her happening experiences on the sets. 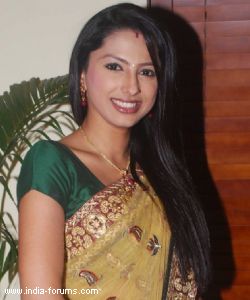 Take us through your life in Saathiya.
When Saathiya took off, we never expected the show to be this successful as the slot 7 pm was new and the main issue was this is a typical Saas Bahu drama, a genre that has been long back faded. And for the same, I was super skeptical about playing the character because initially when I took up the show, I was not told that the character would turn grey. In that way I felt a little cheated (laughs). I was just told that the story would be about two girls of different mentalities and the story proceeds.

Saathiya as you said is a typical saas-bahu drama; did you ever expect it to be this successful?
Not at all because as I said, I was completely skeptical about playing the character and when the role was offered to me even my dad asked me whether I will be able to do it. I had done two positive roles in two different shows in other languages earlier. But then he said since I had already done positive you might as well do this. The show is today a huge success and the role is well accepted by the audience. With this I feel that Saas Bahu sagas still prevail and they can never be gone.

Was there any point during the shoot when you felt 'why you selected the show'?
Yes, initially when the girl turned grey and started giving tough times to Gopi, I always have wondered why is the character doing such things. And it was really very tough portraying the character and I had to sit alone for some moments to get myself into the character and the work was very taxing.

You had a recent trip to Switzerland for the shoot. How has the experience been?
It was mind blowing; better call it an eye opener. I had the notion that the actors are really very lucky to get paid for making free trips abroad and today I am one among them.  But when I reached there I realized that how pity the situation is as there is a lovely place out there waiting for you to shop and enjoy but none can be experienced because you are there for work. Thus my misconception was erased. But at the same time I had a great time shooting a lovely song sequence there in a typical filmy style with Saree that many of the television actors do not get.


You are portrayed as a cynical sister to Gopi in the show, how are you and Gia Manek in real?
We both are mad on the sets and are like soul sisters. Actually the team gets fed up of our masti and pranks that they sometimes have to call off certain things. We have full on Dhamaal on the sets.

How do you feel portraying a grey shaded character?
I think portraying a grey shade character is really very difficult because when I started, I used to give my 200% to the character and I used to keep myself switched off from the rest of the world. Even my director used to ask me to relax but I was too engrossed in the character. But after three months I could switch on and off from Rashi as and when the shot is done.

After portraying grey shaded character for so long, do you think the character should turn positive?
I really want the character to turn positive and I want it to happen it as soon as possible as I am also bored, but I know it is not logical. The show entirely revolves around Rashi and her mother's actions which if turns positive will end the show. So I do not think they can turn positive.

How has been the audience reacting to Rashi and her baiting actions?
After the initial few episodes and after the marriage, people used to come to me and say not to torture Gopi so much. But today they come and say that they like my character as it is very innocent and all the actions are hilarious that they laugh their heads off. I am actually enjoying this as though being a negative character, people do love me.

Star Plus is always a dream channel for budding actors; how has been the experience working with the channel?
I consider myself really fortunate to work with a channel like Star Plus. Frankly speaking I wanted to do a show on Star Plus just for Star Parivaar Awards. Earlier I used to watch awards with my mom on TV and I used to tell her that if all these people can take up acting, then I can also do it. And today I am more than happy as I got more than what I had dreamed.

How has the association been with Rashmi Sharma Telefilms?
The experience has been very very nice. We call her Guru Maiyya and she is very professional and she maintains it that way.

Can you share some memorable experiences from the show?
There have been a lot of memorable moments; I have done stuffs that I have not done and will not do. I have done hilarious stuffs like running around the house and in the bathroom (laughs). And I can watch that every time on YouTube also.

Was it acting that you always wanted to do?
I knew that acting has always been my closest passion and my family and friends also knew this. I have always been very active in extracurricular activities.

You are still studying; how do you manage it with the shoot?
Actually when I gave my final exams, I used to go directly from the shoot and I am glad that even then I passed with first class marks. I want to do law in future.

What would you like to say to the audience and the viewers of your show?
Viewers, keep loving us like how you have been these days. Even though I am negative, you guys have accepted me whole heartedly, thank you so much for that. I hope we will continue entertaining you the same way.

Cintila 8 years ago She is the most beautiful and one of the most talented actors !! love u rucha , u rock !!

cupid-struck 9 years ago i loved her answers...and yeah i totally enjoy watching 'rashi'

-Khush- 9 years ago you are one cool gal rucha ...very down to earth and fun loving...

heaven princess 9 years ago She is TOTALLY amazingg... i love her alott and her acting is superbb Hats of to herr :D:D:D
I can really see that acting is definatley yur passion and yuh shud definatly continue with it in the future no matter what :D:D even if yuh du law hehe
all the best
love you alotttbtw yur smile is amazingly beautiful <3

Saee.T 9 years ago U r amazing actress Rucha :) , the show is nothing without u :)
I look very beautiful and innocent :) and i love ur name :)
I just feel the channel should promote u equally like they promote the other lead :)

nidafatimakhan 9 years ago ur show iz superb we liike it veryyy much...u nd gopi are so cute...

Shivani_4u 9 years ago she is gud actor
all the best rucha...

mayur_shanak 9 years ago nice answers...Rucha u really rocks more than Gopi i like ur acting u will b very successfull in future...keep rocking n just love ur acting keep it up!

jassie_17 9 years ago She is just too cute at times trying to seek attention..seriously one plus point of Saathiya is her antics coupled wid her reel mother..Lollzz!!But it's true liek wad she said,it can be annoying and bore at times...All da best for the show!!!