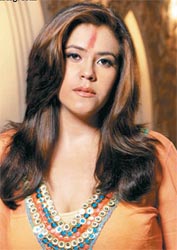 Balaji Telefilms and Zee TV's upcoming show Keshav Pandit has been in talks not just for it being a novel adaptation but more so because Ekta Kapoor is producing it.

However, Ekta Kapoor had been humble enough in passing on the sincere credits firstly to the Writer Ved Prakash Sharma, Director Santram Verma and last but not the least to the channel Zee TV, and regarded them as the three important pillars of this show. She also opined that her efforts have the least involvement.

Talking about her excitement about the letter 'K' again getting associated with her serial she cheerfully replied, "Yes, surely the 'K' series is back and I'm equally excited. However, this time it's a mere co-incidence because luckily for me the writer had created the character with the letter 'K', so I used it without changing it."

Ekta was also modest enough in appreciating the work of her competitors' shows. "Frankly I don't get much time to watch television serials; but if I have to name any serials that I like to glance upon, it has to be the Star Plus serial Pratigya and Zee TV's Jhansi ki Rani. I assume both the serials are doing good on television", exclaimed Ekta.

Ekta was also heard saying that Keshav Pandit has been planned to be a 26 episode series as of now. Based on the audience reaction, the production house will decide whether to go with an extension or not!!

tellybuff123 10 years ago ekta...great to see u hv taken nikhil arya in your star plus show.... d dude's damn good-looking... hp he hs a great role too... waiting to see him.

cimba 10 years ago i wish Ekta and Iqbal khan make up and resolve the diff. I would love to see him in one of the Ekta's serials.

mysticgoryfilms 10 years ago I want to see keshav pandit. -- seems like a great show with a different concept!

LimitLessFan 10 years ago I dont watch pratigya, but iam found of JKR, glad shedoesnt produce any of them

Preternatural 10 years ago thanks for appreciatin pratigya....keep watching the show