This weekend’s musical shows can be summed up with just two words- “Thoroughly Enjoyable”. Whether be it K for Kishore or SVOI’s Chhote Ustaad, they managed to capture the attention of the viewers with some brilliant performances and heart touching moments. 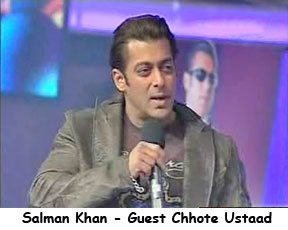 Featured Video
In VOI Chhote Ustaad, it was the last week of studio performances. The show was surprisingly “sensation and drama free”. The performances on both the days were outstanding. The theme on Friday was “bidaai” – a very emotional theme, and as expected some great songs on this theme were sang by the top five. However one thing needs to be questioned here is - was the theme of marriage suitable for young kids who have just stepped into their teens especially looking at the kids who seemed quite embarrassed on the sets. Soniya’s elimination was surely an emotional moment and this little bundle of talent girl gave one of the best performances of the day before bowing out. Anvesha’s song selection somehow is not up to the mark and is failing to connect with the masses. Did Pritam go a little overboard on his ‘advice' to Anvesha and even with his reaction on Sonia’s elimination when he made a walk out asking the producer of the show to stop all eliminations? Salman as a guest was indeed the boost the show needed. The sets reverberated with energy and one conspicuous thing was he seemed to call the shots and judges had a tough time keeping up with him. Except for the “Dare to Bare” fiasco, the rest of the show was totally enjoyable. Prakriti forgot her lines midway but was given the go ahead by Salman, something that might raise questions as many others were not given the same chance earlier. Anvesha made up for the weaker performance of Friday and gave a good performance on Saturday, however the show stealer was definitely Ashwariya and her effortless, flawless and outstanding rendition of Albela Sajan. It was perhaps one of the best performances among the reality shows that we have witnessed in recent times. 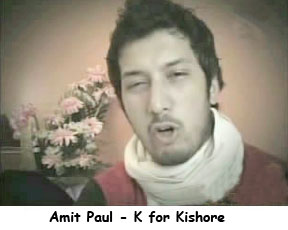 K for Kishore this week celebrated the Big B special featuring hit songs of Kishoreda picturized on Amitabh Bachchan. The show featured some really good songs of this super Jodi and was very enjoyable. It seemed all present in the sets, be it the hosts, the participants or the judges, they all enjoyed themselves to the fullest. Celebrity guest Javed Akhtar Saab was yet again very precise in his observations and advices. Nagesh Kukunoor, the other celebrity guest of the week was also quite involved in the proceedings, he being there to hunt for the most suitable voice to playback for his forthcoming film on Kishore Kumar. Amit Paul yet again missed the episode due to a serious throat ailment. This week he got a respite and next week his fate will be decided. How fair is it on other contestants to give Amit Paul so many chances? This weekend Amanat Ali and Rex were in the bottom two and before the elimination could be decided, Rex opted to bow out of the show so that Amanat Ali could stay. Professionally how right this was on Rex’s part to get out this way is for Rex to contemplate, but what was heartening to see is that in this cut throat world of competition, one contestant felt so deeply about a fellow contestant that he decided to bow out to make place thus becoming the real hero despite getting eliminated.

This week’s performances have left the viewers satisfied enough to expect more such treats. Hopefully this drama-free journey will continue and we will get to concentrate more on quality performances than on other trivial paraphernalia.

+ 5
14 years ago Show was fine sallu always kae his presence feel on show..and make judges invisible..
He knows some thing abt music and gives good comments..

K for Kishore.. hmm i think its high time for Amit to step down.. i agree he is a good singer lekin if not well we cant simply drag the show and finally declare him a winner with out a performace now..

Regarding rex.. he is a good hard working singer... i have head him lots in Fame Gurukul..

+ 3
14 years ago Honestly speaking I never expected a Salman episode to have serious singing but wow what a fabulous treat. They were all good.Ashwarya's Albela Sajan was simply mindblowing. SH erendered the tough versions and what a performance ! Hats off !

Rex was very sweet. In my eyes he is a winner.many can siong well, but how many have a heart as big as his... simply superb.

I agree on the part that this marriage theme was not at all suitable for 'CHOTE' Ustaad..!!!

K For Kishore....i liked only a few performances this time though...but overall the show was good...will miss rex...!! N amit..is one of my fav singers...i hope he recovers by next week n is able to sing...wud love to hear one mesmerizing song from him..:>

14 years ago Anwesha is the best singer.why they are giving her not so good songs in comparison to others I cant understand..This is really very sad and unfair..

+ 3
14 years ago Sad that Sonia left but I guess now there's very little difference between the contestants. Luck is a major factor now.