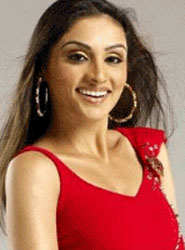 Purbhi Joshi, the Reality specialist who was earlier seen in Mr. and Ms. Television as well as Ek Se Badhkar Ek has now moved to fiction with Madhur Bhandarkar's series on Specials @ 10 on Sony , 'Heroine'.

Heroine is a series of 12 stories, each about strong and commanding women in their own special ways.

When talked to Purbhi about her story, she says "I am playing the lead character in one of the series of Heroine, which deals with one story every Thursday. My series is titled 'Riya', and I play the central character Riya. She is very modern and a confident woman, a house wife with two children".

Riya which is produced by Madhur Bhandarkar and Ashok Pandit is the story of a modern day woman who manages home as well as her work. The story is about the relationship between husband and wife, played by Sumeet Raghavan and Purbhi Joshi.

Purbhi is excited to be part of the series. "I am very happy to be working in the show with such an ace director. It was a great experience and I enjoyed it", says the actress.

Heroine is aired every Thursday at 10 PM on Sony Entertainment Television. Riya will be telecast on March 12th.

+ 9
13 years ago Sumeet-Purbi 2gether plus Madhur director. Will watch the show for them :)

13 years ago purbi is a great actress .looking forward towards RIYA.:)

13 years ago these stories are really boring man.... none of the four shows is really interesting....