After hosting the reality show Fame Gurukul, and sizzling television screens with her cricket commmentary, Mandira Bedi is back on screen as the host of Jo Jeeta Wohi Superstar, Star Plus' new reality show. Here is the svelte actress in conversation with Telly Buzz reporter, Melanie. 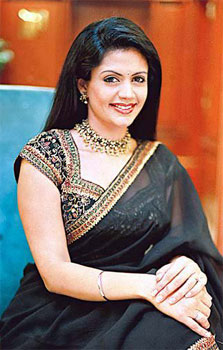 Featured Video
To begin with Mandira, what made you take up anchoring this show?

Well the show has an interesting concept. It is completely different from the norm that generally takes place in reality shows. All the singers participating here are quality singers and they are popular with the audience. And they are not new to this platform; they have already performed in front of the public. Above all, it’s a nice concept of pitting the challengers against the champions.

So you think it’s a good idea to put all these contestants together on one platform?

Why not? These singers were chosen by the public. Many of them lost out from winning the title by a small margin, but now they are getting another opportunity to prove themselves again.

What is the USP of the show, according to you?

Honestly, I think the USP of this show is bringing together the singers of different reality shows on the same platform. I have seen the craziness in the audience when singers like Abhijeet, Debojit et al have performed and now Star is giving its audience the unique chance of seeing their favorite performers again on stage. I think that is the biggest USP of the show.

But it is always seen that post winning the title of a reality show, the performer fizzles into oblivion after a span of time. Your comments on this.

I agree that this happens. But it is a fact that even if these singers do not get the right chance to prove their worth, they are still very popular. I have heard a lot of people say they are eagerly awaiting the start of this show. So it just goes to prove that even if the singers have faded into oblivion, they are still popular with the audience. And that’s what this show does; it brings back your favorite face back, which was in the recesses of the public’s memory.

So will Mandira try her hand at singing while anchoring?

Never. I anchored Fame Gurukul, which was another reality show and I enjoyed doing the show. I know it’s usually a trend that singers host singing reality shows, but I have anchored in the past and I have never sung, and I don’t intend to do it this time either.

The IPL is starting soon, so what do you have to say about that?

The IPL is a wonderful platform for our young talented cricketers who are not getting a chance to play for the country. It is a great chance to bring out the hidden talent in the untried and unused cricketers. And in addition, there is a lot of money involved. There is also full on entertainment provided to the viewers.

You think with the IPL running at the same time, television shows will face a dip in their ratings?

Lastly, will your fans get see you back in serials anytime soon?

Not at the moment. I am very happy hosting shows and frankly I do not find anything appealing on television right now. Probably if something like Shanti comes my way, I guess I might take it up, but then again it’s highly improbable that someone will make something like that anytime soon (Laughs).