View Profile
One of Bollywood's most hardworking and talented actress, Priyanka Chopra, was spotted in the revered and holy Ajmer Sharif Ki Dargah. Our sources reveal that Piggy Chops had gone to seek the blessing of Saint Khaja Moinuddin Chisti. 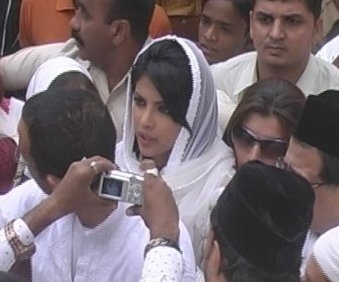 Featured Video
Miss Chopra had asked her security to wait outside, while she offered a chaddar at the dargah and continued to pray inside. Our sources reveal that it was clearly visible by the actresses face how hassled she was feeling standing in the middle of an insane crowd. The surprising element is that Priyanka did not call her security and continued to stay inside for a total 15 minutes.
Coming out finally however, Priyanka got into the first car she saw. She then realized that it wasn't her car. Piggy Chops apologized and moved over to her own car.

A cute little mistake, no one would mind, eh?!