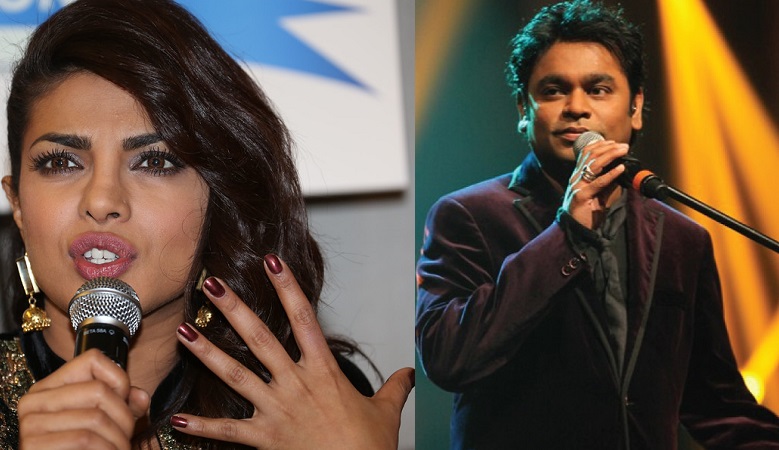 Priyanka Chopra termed "rude" the social media criticism of Oscar-winning composer A.R. Rahman for singing Tamil, and not Hindi, songs at a concert in London.

"Well, first of all, that is rude. I do not know the details so I do not want to talk much about it," said the actress who is here with the cast and crew of an upcoming Marathi film which she is producing.

The actress said she is in India instead of New York attending the International Indian Film Academy (IIFA) Awards as she wants to have a birthday party with her mother and brother.

"Unfortunately IIFA and my birthday coincided. I do not get much time to spend with my brother and mum. So yes, I deserve this holiday."

According to reports, some left the concert after he started singing Tamil songs and then trolled him on social media.

Rahman is currently in New York for the 18th edition of the IIFA Weekend and Awards and is yet to directly comment on the incident.

IamCrazySeven 3 years ago people are angry at AR.Rahman because he sang 12 Tamil songs in a concert happened in U.K, Funny thing is he sang 15 Hindi songs as well.
Best part is concert was named in Tamil. This is height of hypocrisy. can't even digest 12 Tamil songs in concert.

rink80 3 years ago When the music is good, language doesn't matter. Despacito is a good example

nik1310 3 years ago We as Indians enjoy a lot of songs of other languages like spanish ...currently Despacito is ruling the world including India then why can't others just enjoy music of ARs

leavesandwaves 3 years ago They were misled, I think. I dont know about the ticket prices. If they are high, it is natural if someone feels that they did not get their due. Nothing to do about not liking other languages.

Annasabu 3 years ago I don't know why people are rude. Social media is not to troll and disrespect someone's feelings.Rehman sang hindi song as well in the concert. A music lovers enjoys songs of all sort.Because music has no language, that's why we like 'gannam style' song and Mehdi hasan ghazals in the same vein. Intolerant idiots should keep away from such concerts for the music lovers.

lechuarshi 3 years ago He sang in his mother tongue...so what..?? Just bcuz lots of people speak Hindi, there r other 22 national languages.. Which has its own worth.. Music is beyond the boundaries of languages..
I am frm kerala, most of us here enjoyed malayalam, tamil, hindi, telugu and English music..
What AR did was good... If people cant appreciate it, then its very sad and disappointing.

angelic8219 3 years ago There have been adverts on TV for A R Rahman concert, I'm guessing that was misleading since it featured Hindi singing. If it was mostly a different language than Hindi then majority wouldn't have turned up unless they know Tamil. Unless people are using YouTube then we don't get much access to other languages it's mostly Hindi and Urdu TV channels. Even South movies are dubbed in Hindi.

ixray 3 years ago the title of his concert itself says its going to be in another language.
those fans are stupid who ignored it. AR is not my favorite but i don't think he did any wrong here.

review
Review 'Bandish Bandits' Hits The Right Tunes With its Acting ...
30 minutes ago