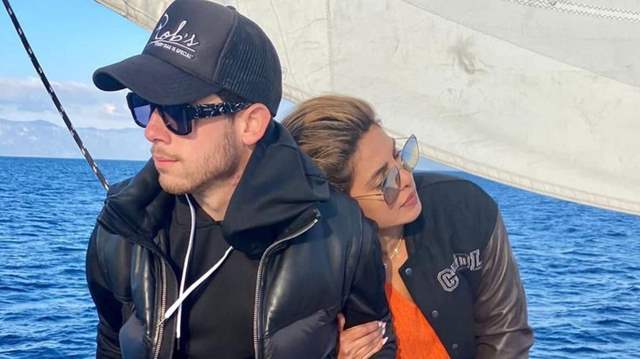 Priyanka Chopra and Nick Jonas are currently busy enjoying parenthood after the couple welcomed their first child Malti Marie earlier this year in January and have since then been spotted in public only for work appearances. But finally, they took out time from their busy schedule to enjoy a romantic getaway.

Well, Nick Jonas joined celebrities like Justin Timberlake, Miles Teller, and others in playing golf over the weekend at Lake Tahoe.

While, Priyanka being the biggest cheerleader for her husband, joined Nick at the game to wish him luck and show her support. It goes without saying that the couple utilised their trip to Lake Tahoe as a brief retreat. Nick and Priyanka also took some time to relax on the lake after all the golfing.

Nick took to his social media to offer a glimpse of their quick romantic getaway. And it's all times dreamy. Priyanka and Nick took a photo on the boat while holding hands, showing off their carefree romance.

While Priyanka donned an orange tracksuit and layered it with a black jacket to stay warm on the other hand Nick opted for an all-black outfit. Sharing the photos, Nick captioned it, "Magic hour (heart emoiji)."

Talking about Peecee's work front she has recently wrapped up her Hollywood project Citadel, and she also has It's All Coming Back To Me in her kitty. Meanwhile, her Bollywood film Jee Le Zara has reportedly been put on the back burner for now, and there's no update on the same just yet.