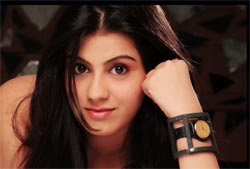 Priyanka Chibber who was earlier seen essaying the role of Natasha in Star One'es Rang Badalti Odhani has now bagged a meaty role in UTV Bindass' new fiction show, 'Meri Toh Lag Gayee.. Naukri'. We hear that Priyanka will be playing the main protagonist in the show..

Talking about the show, our source says, "It has an entirely unique concept, and moves away from the regular soapy way of narrating a story. It will have an interesting narrative riddled with twists, turns and most importantly a direct connection with the youth".

Talking further our source states, "The show captures the essence of youngsters who are coming of age. It depicts their transition, and traverses thro' the most important phases of their lives in a light-hearted and fun manner. The casting has been finalized, and  Priyanka is the one well known face from the group".

We tried hard to contact Priyanka but all our efforts were in vain.

However, a source close to Priyanka did confirm that the girl has been roped in to play a very outgoing girl, and she has already started her shoot for the show.

The show is expected to air soon on UTV Bindass!

SHANAKFAN 9 years ago best of luck to her n ya she portrayed natasha very well...

The_May_Rose 9 years ago Best of luck to her....She was sweet as the first Natasha in RBO....She and Khushboo looked like real siblings :)....