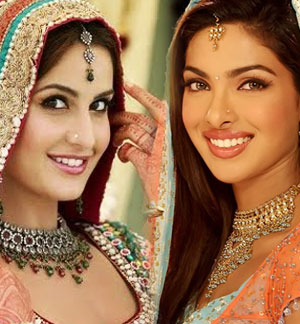 For the first time ever, two beauties of Bollywood Katrina Kaif and Priyanka Chopra will act together in the Hollywood remake of 'Bride Wars'. It was one of the blockbusters of Hollywood starring Kate Hudson and Anne Hathaway .The news that Katrina had replaced Priyanka in the sequel of 'Dostana' sparked the rumours of difference between them. For the two roles, it is said that there was competition between Katrina Kaif, Priyanka Chopra, Kareena Kapoor, Asin, Sonam Kapoor and Deepika Padukone.  However according to rumours, Shristi approached Priyanka and Katrina for the roles and both expressed their keen interest in the project as they were able to relate to the characters. The characters need to be fashionable and trendy for which both Kat and Piggy Chops fit the bill.
The story of Bride Wars is about two best friends who turn enemies after their marriage is  unfortunately fixed at the same date and same venue. The film will be produced by Shrishti Arya.  Its been reported that Shrishti has bought the rights to remake the film.  The basic story line would remain close to the original but it would be adapted to Indian culture.  It is said that the story would be circled round a big fat Punjabi wedding with full of colors, fun and frolic, songs and dances, fireworks and so on.

The film will go on floors in the coming months.  The producers are still to decide on the rest of the cast.
Katrina and Priyanka have never worked together before so it will be interesting not only to watch them together but also how the two best friends fall apart at later stage.
Featured Video