Priyamvada Kant who has bagged the role of the eldest sister Kanchan in Sony and Balaji Telefilms' Bayttaab Dil Kee Tamanna Hai had no 'industry connections' but had come with a strong willpower to enter the field of acting. 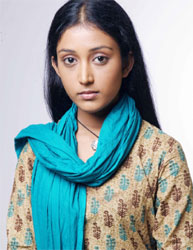 Featured Video
She says, "I come from a family of artists. My mom is a sculptor and my dad is a painter as well as a dancer. So I always had an inclination towards art. I knew I had to make it as an actor but had no clue how. So I moved to Mumbai from Delhi, with an added excuse of completing my post-graduate diploma in mass communication."

Like they say, her will power did open up the ways of opportunity and she was selected through auditions for COLORS' Bairi Piya in which she bagged the role of Kaumudi.

Says Priyamvada, "Balaji Telefilms gave me my first break thro' Bairi Piya. But destiny had something else in store for me. The day my first episode of Bairi Piya was aired, I was finalized to play the lead in Balaji's other show on Sony, Bayttaab Dil Kee Tamanna Hai. My main motto in coming to Mumbai was to become an actor and a film maker. Five years from now, I very well know that I wil be doing something as a film maker too".

Priyamvada is a trained Odissi dancer, and has been dancing since the age of three. "Yes, I have been dancing for more than 15 years now (smiles)".

So how does she think about being the replacement for Anupriya Kapoor who was earlier finalized for Kanchan's role? Priyamvada replies pragmatically, "I feel sad that Anupriya lost such a good opportunity. I now want to say that I was destined to get this role (smiles)."

Hope her faith in destiny makes it kinder towards her...

13 years ago she is the lead but i thought shamoli was the lead..

+ 3
13 years ago wow never noticed she was Kamudi!..but her role is pretty sweet..