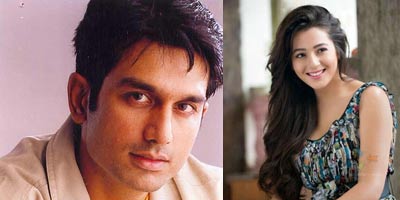 Priyal Gor was last seen in Dekha Ek Khwaab has since been out of dailies. The actress had done a Punjabi films and was also part of few episodic on different channels. Now we get to hear that her next episodic is a show called Sirf Ishq Kills on Star Plus. Sachin Khurana who was last seen in Savdhaan India @ 11 will be opposite her in the first story of the series.

Telling us more about the concept of the show our source says, "It's a 26 episode format and each episode will have different love stories. Celebs have been roped in to play different characters and the first episode story is called Kissing Cousins."

Elaborating more on the story line, our source adds, "Well, it's the story of two cousins falling in love. Their relationship is not accepted by the family and the two flee away to different place. What happens next is an exciting story further."

"These show is made by the same people who are behind Savdhaan India @ 11 and is an experiment to check of how it goes with the audience. For now there are only limited episodes and if all goes well the channel and producer may think of the next season."

When contacted Priyal she refused to talk and said, "I can't comment anything on that. Please ask the channel for the quotes. Right now, I'm busy promoting my Punjabi film - Just You And Me."

Priyal who will debut with this film tells us more about the storyline and says, "Yes it's kind of my first film and it is a comedy. The story is based on teenage love and how two people fall in love, what events take place and importantly how parents should deal with it. It's releasing on December 6," she concludes.

We wish Priyal luck for her film and her show too.

I don't know about other religions neither I want to comment, but in Islam it's allowed and common. and there's no harm in it. all in all everyone have different customs, so we are not supposed to comment on anything.

green_tea 6 years ago cousins do share a blood relationship, otherwise they wouldn't be related. if your mom and aunt are sisters for instance, that means they share the same blood. it also means you share some of the same blood as your aunt, as she is related to your mom. now if your aunt has a son for example, he and you share a genetic link through his mom and your mom as they are blood sisters.
if you then marry your aunt's son, (your cousin) you are basically marrying a blood relative. maybe not full blood like your own brother or sister, but there is still a genetic connection. furthermore, there can be complications (deformities) when cousins have children, which is why it's not advisable.

Angelicprinces 6 years ago I don't get how is it incest when cousins are in love?Cousins do get married in my religion-Islam.It is accepted as cousins are only 'cousins',not our actual blood sibling.What the fuss is all about then?

ShadeOfWhite 7 years ago There is nothing wrong in marriage b/w cousins...in Muslim culture its very common...as its clearly stated other than our own blood siblings we can not call our cousins as 'brother/sisters' because we can get married to them..I'm happy SP explored this new concept...

-GothicBeauty- 7 years ago dude!!
r u serious
how can people be okay with cousins falling in love ??
its like sister n brother romancing
this is just sick

Lechocolat 7 years ago To the person below me: I am punjabi and it is not ok for cousins to get married in our culture!
To all the freaks out there, stop ogling your cousins. You guys ARE related.

Shivani_4u 7 years ago i dnt knw abt south indians...bt in north india cousions' marriage is a common thing for punjabis n for d rest of castes topic is highly disgusting..stop this nonsense star plus or society ko kuch acha message do.

Sam_KaShian 7 years ago i see nothing wrong in the story! cousins do get married! it's not like they are actually brother or sisters! even in our family my aunt is married to her cousin!
i think SP is doing a gr8 job taking such a bold step! way to go SP! :)

Noe123 7 years ago Keeping the story aside for a while, I am confused about the format. Is it going to be the crime show that Star doesn't have or is it going to be like Teri Meri Love Stories or Yeh Hain Aashiqui? It is not clear from the article.