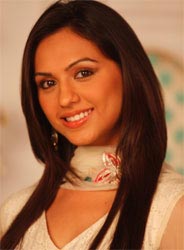 After working as female protagonist in many daily soaps, Priya Bhatija dares to step into the realm of horror shows through Aahat- The All New Series.

According to our source,"She will be seen doing an episodic. She is featured in the second episode of Aahat's second season. The first episode will feature Srijita."

Priya Bhatija confirms the news. She says, "Yes I am working for Aahat-2 but don't want to reveal many details about it. I don't want to spoil the suspense. All I can say is that I am playing the character called Shama. She is a very nice, cute girl and a Fashion Designer by profession."

Talking about the plotline Priya says, "The story revolves around some mysterious evil which goes on killing many people who Shama knows. The fact that this evil is somehow connected to her through seven degrees of separation is what makes it interesting."

A news item recently stated that her marriage with Jatin Shah is on the rocks. Regarding this Priya says, "It's all rubbish. I cleared myself saying that we are very much together and those who think that we are not going well is most welcome to our place to see how much in love we actually are! I recently celebrated my birthday with Jatin in Pune and to read such a news so soon after that is a major dampener."

When asked what was Jatin's reaction to the news she said "He was laughing and he also said that whoever still has doubts is most welcome to our place to clear it out for themselves."

Aahat – The All New Series launches on Sony on 13th November at 11pm.

13 years ago jatin and priya are such a cute couple! &lt;3

+ 5
13 years ago Wow another Aahat, I watched Aahat 1 some 10 years ago and man it was some scary stuff

And media has seriously nothing to do!!!

+ 6
13 years ago these media ppl really have nothing to do, so they cook up these lies and gossip rumours abt celebrities' married lives being on the rocks??...!!! utterly disgusting

13 years ago its really funy how peple are writing stupid articles on the private lifes of the married stars and demeaning them!