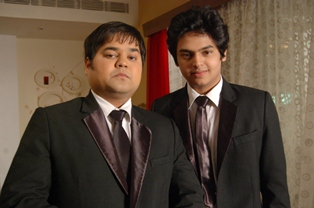 The latest SAB TV's Horror Comedy show Pritam Pyaare Aur Woh is having its own share of fun among the cast members.

Pritam played by Siddharth Sagar is the tech savvy partner in a pair of ghost hunters in this new TV series. Pyaare played by Prasad Barve is the gullible brother who listens to everything that Pritam says. On a recent outdoor shoot, Siddharth scared Prasad by playing a ghostly prank.

Siddharth is a tech savvy person and always hooked on to his phone or tablet. During the shoot he surfed through some blogs which talked about haunted places and had photos with the locations of these spooked destinations. As he casually flipped through some photos, Siddharth realized that their shoot location was eerily similar to one of the locations enlisted on the blog. He showed the photos to Prasad & told him to be cautious as the place could really be haunted and strange things were happening around on the sets. Later, Siddharth downloaded an app on Prasad's phone which made it look as if his screen had cracked.

When Prasad looked at his phone & could not understand how it happened, Siddharth spooked him by saying that it could be because of a ghost. Prasad was scared to death and Siddharth had to reveal that it was a prank and there was no supernatural activity on the sets.

Siddhartha Sagar said, "All my co-actors know that I play pranks. I could not resist tricking Prasad this time. I knew he was a bit spooked because of the location, I simply aggravated his fears with fake stories and the cracked screen prank was a cherry on the cake. He did get angry but it was all in good humor as no real harm was done. We both are the best of friends and joke with each other all the time."

Only time will tell if Pyaare gets to turn the tables on Pritam!!