The two key notable factors of this episode are that Himesh Reshamiya is absent and Shekhar fills in for him. And this one will be Asha ji's last episode as a judge in this challenge. She tries her best to motivate and encourage the participants as much as possible.

Himesh had to leave for one of his International tours. While leaving the sets, he handed over his cap to Shekhar to supervise his Gharana. In his absence Shekhar will take full opportunity to do full time masti on Himesh. He will imitate Himesh throughout the show and sing songs in his style. Ashaji will also join him in doing so, both of them will sing in Himesh's nasal style. Later the show starts with Aditya, Sikandar and Nirupama singing "gustakh dil" from the film "Ye dil maange more". 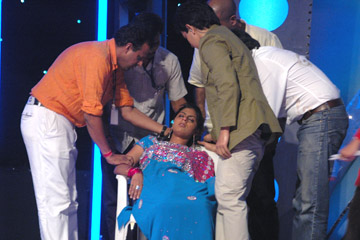 The first one to perform is Reecha Tripathy from Bappi da's Josh Gharana who is followed by Wasi Effendi and Jyoti Mishra. Both of them are asked to improvise on their performances. Imran Aslam of Hit Gharana sings "Tere Naam" next. But his performance is not upto the mark and he gets criticized by everybody and finally gets eliminated. The subsequent performances are by Joy Chakroborty and Sarika Singh. Among the girls, Sarika gets eliminated. She was so shocked to hear the results that she literaally fainted on the sets!!! There was a lot of chaos and confusion there because of this.


The show ends with everybody bidding a fond farewell to Ashaji. All the mentors sing for her. She gives her best wishes to everyone and bestows her blessings on all the participants.

14 years ago the best place to watch all sorts of drama! SRGMP! lol!

thnks for the article!

+ 2
14 years ago It's sad that HR won't be there...We will miss him a lot...but I think he did a very wise job giving the responsibility to Shekar...I'm sure he won't let HR down

14 years ago its going to be interesting.. but i think its so unfair for Himesh.. poor guy at least Shekher is da only plus point!!

+ 4
14 years ago thanks a lot! seems interesting and i cant wait until tomorrow to c this for myself

+ 3
14 years ago Seems to be an interesting episode.. Shekhar taking place of Himesh.. That should be the highlight..