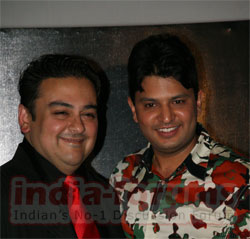 , after the success of 'Tera Chehra' and his last album 'Kisi Din' have joined hands once again to come out with a brand new album.

The album titled "Best Friends" was released by T-Series on 27th Dec '07, and promises to show an even slimmer and different look of Adnan's.

Choreographer Remo has directed the song 'Assalamwalekum' while Sameer has provided the lyrics. Seeing how Adnan has always had a loyal fan following, it will be interesting to see how he competes with not just the current crop of new singers but also the dancers – yes, because the album is a total dance album with foot-tapping music to match steps with the 'slim n trim' Adnan who sports a french beard too.