This Friday, Idea Dhoom Macha De presents a Baisakhi Special episode! Joining the Dhoom Team in this fun filled festivity is a special guest… none other than… the bubbly and stunning actress Preity Zinta! Watch her have a blast as our singing superstars showcase splendid performances dedicated to the occasion of Baisakhi in a special presentation this Friday, April 11th at 8:30 pm only on NDTV Imagine! 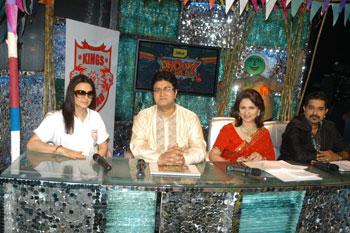 She has a great time on the show cheering for her favorite singing superstars and commenting on their performances! The Dhoom team sings songs dedicated to this festival which marks the arrival of the harvesting season.

While Devang sings a medley of Gujarati folk songs like Ashad Asaaram, Sambhelu, Aalaji Tara Kisaan Tere Sajde Mein Jaoon, Babul sings a Bengali song like Dhitang Dhitang Bole and the popular track Chappa Chappa Charkha Chale. Richa delves into Punjabi folk with songs like Jaavoni Koi Mod, Adlib, Challa Kariya Mirchaya, Aayi Hain Baisakhi and the popular song Kaava Kaava from the film Monsoon Wedding, while Baba Sehgal has the judges and audience applaud for him, with his lively performance on Rang De Basanti. Jaspinder sings some filmi favorites like Aayi Jhoom Ke Basant, Purva Suhani Aayi Re, Mere Desh ki Dharti and the lively Tera Rang Balle Balle, from Soldier which has Preity grooving on the stage with her! Also presenting a special stand-up act is comedian Bhagwant Mann as he has the audience and judges rolling on the floor with his incredible sense of humor.

Don't forget to tune in to a very exciting and entertaining Baisakhi Special episode this Friday, April 11th, at 8:30 p.m. only on Idea Dhoom Macha De on NDTV Imagine!

14 years ago she does look beautiful..i agree..but what are those sunglasses doring indoor?????