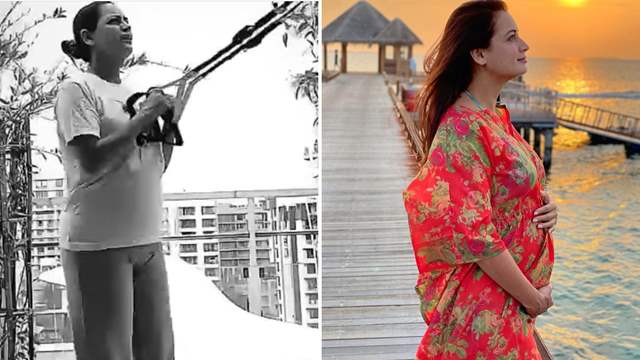 Mom to be Dia Mirza is working towards a healthy pregnancy as she has turned her home terrace into a gym. The actress shared an inspiring video as she aces some weight training and yoga with her fitness trainer.

In the video clips shared by Dia on her Instagram story, she can be seen exercising and stretching along with doing some Yoga. She can also be seen doing pulling exercises and weight training and this video is surely an inspiration for all moms to be! Her baby bump is also visible in the video.

After tying the knot to businessman Vaibhav Rekhi in a low-key ceremony last month, Dia Mirza recently announced her pregnancy on social media.

Sharing a beautiful picture cradling her baby bump against the scenic waters of Maldives, she had written: "Blessed to be. One with Mother Earth. One with the life force that is the beginning of everything. Of all stories. Lullabies. Songs. Of new saplings. And the blossoming of hope. Blessed to cradle this purest of all dreams in my womb.”

As Dia announced the good news with her fans on social media, one user asked why she did not share the news before she got married. “That's so good, congrats. But the problem is, she tried to break the stereotypes with woman priest, why couldn't she announce her pregnancy before the marriage? Isn't becoming pregnant after marriage a stereotype we follow? Why can't women get pregnant before marriage?” the user had written.

Dia had hit back with utmost class and confirmed that she did get pregnant before the wedding but that was not the reason to tie the knot.

“Interesting question. Firstly, we didn’t marry because we were having a baby together. We were already marrying as we wanted to spend our lives together. We discovered we were going to have a baby while we were planning our wedding. So this marriage is not the result of pregnancy. We didn’t announce the pregnancy until we knew its safe (medical reasons). This is the happiest news of my life. I’ve waited for many many years for this to happen. No way I would hide it for any reason other than medical”, the actress had responded back.