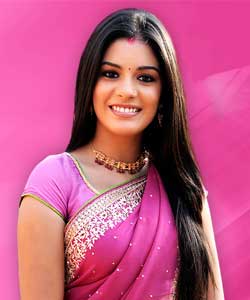 All is not so well between Avni (Shweta Munshi) and Bhaskar (Rohit Khurana) in Star Plus' Maykee Se Bandhi Dor. But in the coming episodes, the viewers will see Pooja Gor entering the show as the cupid between Avni and Bhaskar.

A source says, "In the coming episodes, Bhaskar and Avni will head for Allahabad for some work where they will meet Pratigya. In a conversation between Avni and Pratigya, Pratigya will make her realize the goodness in Bhaskar. The creatives have not yet planned the entry of Pooja Gor."

We tried calling Shweta Munshi and Pooja Gor, but both of them were unavailable for comments.

We also hear that Dor is planning for its Maha Episode on 30th July and Pooja Gor's entry might be aired in the episode.

Will Pritigya's entry bring in the wave of love between Avni and Bhaskar?

dhakarn 9 years ago great ...Pratigya is always a helping girl...may her advice work magic in dor too

riyya6 9 years ago Good to know that Pratigya will be there... Hopefully krishna is there also...

Filza. 9 years ago hope Krishna will also be there with Pratigya

sidlover4lyf 9 years ago Cool x but like everyone is saying I also wish Krishna to also come x that will be quite awesome for their fans x
... Kriya...

Dav1d 9 years ago There is a bunch of ur Hot collection at
myfilehost.zxq.net