We very well know Pratichee Mohapatra as the Viva girl with a very melodious voice who has launched albums of her own, who has also lent her voice to some amazingly good numbers in Bollywood as well as regional films!! 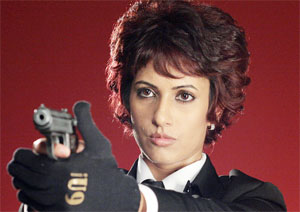 The dynamic personality has also written and composed few songs for her yet-to-be-released album 'Peril of a Pop Princess'. Now Pratichee is all set to add a new dimension to her ever-growing forte, and that is acting.

Yes, you hear it right, and as reported exclusively by Telly Buzz earlier, Pratichee Mohapatra will be seen in Sahara One and Anubhav Sinha's upcoming thriller, Mr. and Mrs. Mishra.

We talked to Pratichee who says, "Acting was not a planned move at all. Singing is my love and I consider it as my profession. However, I was open to trying different things. I have even walked the ramp and have done many commercials".

"I have known Anubhav Sinha and his brother Anupam for nearly 6-7 years now, and one fine day I got a call from Anupam who said that his brother wanted to cast me in his show. Initially, I was not very open to working on television, as this five day a week show would demand most of my time. But still, I decided to audition for it, and I was lucky enough to get selected. I then decided to take this big plunge", she adds.

On her role in Mr. and Mrs. Mishra, Pratichee quips, "I am part of the Unit 9 team, which is lead by Rahil Azam. Working with Rahil is a great experience. He is a seasoned actor, and it is nice to watch his discipline while he is at work. I play Urvashi Srivastav who happens to be the youngest in the team. So the entire team is protective of me, and takes good care of me. The experience has been very good so far, and I am looking forward for the show to launch".

She goes on. "Casting for the show has been done smartly. Rahil is obviously the Big Boss, and Samreen Zaidi who is cast as Mrs. Mishra also has this mature demeanor about her. They are our seniors at work. We then have Priyamvada Sawant, Akshar, Jeet Soni and me as the second rung officers, of which I am the youngest (smiles)".

Mr. and Mrs. Mishra will launch on Sahara One in the first week of September, the promos of which are already on air..

"You don’t deserve the chair you have acquire. SHAME": Kangana ...