Sahara One's supernatural show, Kaisi Laagi Lagan will see a new twist with Pratha(Mahi Vij) coming face to face with her clandestine past. The curse that Pratha’s mother has been guarding from the world – the secret that her family is cursed and that nobody in her family would ever have a happy married life will be revealed in the coming episodes. 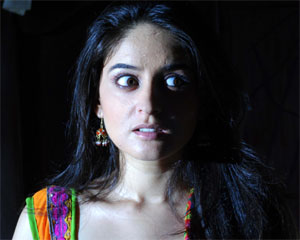 Giving us info on the track is our source, "Pratha and Raghav who are in love go for a college camp, where Pratha all of a sudden gets lost in the jungle. She ultimately reaches the Haveli where the family curse had originated. As Pratha enters this place she recognizes this place to be the same one of which she used to dream as a child. The thought of all those haunting nightmares send a chill down her spine. Soon strange set of unexplainable supernatural incidents happen to Pratha and she gets trapped inside the haveli. Pratha gets so scared that she falls unconscious and Raghav comes and saves her. Just when Pratha and Raghav leaves the haveli, the viewers are shown a very old painting in the haveli of a royal couple, and strangely the face of the girl in the painting resembles Pratha".

On the mystery and more on Pratha's look-alike, our source elaborates, "Some 200 years back, Pratha's ancestor Vijay Mann is in love with Meghna(look-alike of Pratha), but he cannot marry his love because he has Mangal dosh and according to that, his first wife will die soon. So he eventually marries a poor girl Manyata with the idea that she will die in the next 40 days, after which he can get married to his lover and live happily. But it so happens that Manyata gets to know this truth and gives a curse to Vijay Bann that no marriage in his family will be successful and no one will ever be able to lead a happy married life. She then commits suicide and dies. Her ghost though remains in the haveli, but in typical Bhool Bulaiyya style, is trapped inside one room in the haveli".

Another twist in the tale is that Pratha and Meghna, the girl who Vijay Bann loved bear resemblance with each other. This is one more reason why the ghost is hell bent is ruining Pratha and Raghav's love life...

Will Pratha succeed in overcoming the family curse?

Watch Kaisi Laagi Lagan every Mon-Fri at 11PM, on Sahara One...

"I am glad Nakusha brought a message to the audience through Lagi ...

thank god they made it a lttle bit different!

-Ami- 11 years ago oh! the show is like really getting interesting day by day!

l0vey 11 years ago soo there''s so much happening in the show.
glad raghav is still out saving pratha :)

mayah 11 years ago Sounds a lil bit like Karam Apna Apna when it first started wen Iqbal Khan was in it....