View Profile
Prasad Barve who has been at his comic best in shows like Dill Mill Gayye and Pyaar Mein Twist will be seen in a completely different avatar in Zee TV and Hats Off Productions' new show Chhoti Si Zindagi. 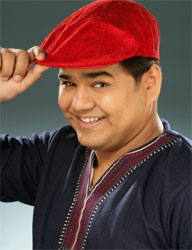 The actor essays the role of the cook Calendar in the story which traces the life of two kids Isha and Ira. He happens to be the only positive influence for the kids amidst the presence of the evil minded characters of Devki (Sushmita Mukherjee) and Bhola (Sachal Tyagi) in the orphanage.

Our source states, "Prasad Barve will be seen in a serious kind of a role, and for the first time will not add to the humour quotient. He essays the role of a very simple cook who not only keeps the kids in the orphanage happy by serving them food, but also stands by them in times of need".

Will this role of Calendar be similar to the iconic character with the same name in the movie Mr. India? Has Prasad Barve tried to take a leaf out of the great actor, Satish Kaushik?

Well, Prasad Barve does the talking..

"I feel it as a honour to be playing a character with such a name. But my character is nowhere close to the Calendar of Mr. India. My role is more serious and does not have a comic touch to it. Having said this, I will want people to remember the character from the flick while watching me, and at the same time consider my role to be the new Calendar on television".

Talking about the character, he says, "This role is very challenging as I have to get the kid in me out. I am the only character in the show that gels well with the kids. I get on well with the kids off the screen too, and it is fun being part of the show".

Tune in to Chhoti Si Zindagi on Zee TV from April 4th at the 7 PM slot on Zee TV..

taralhshah 9 years ago No!!! we want shilpa anand in ur new show plzzzzzzzzzzzz

rose-girl 9 years ago till now he is the best actor! othr's r borring!:(

Keva 9 years ago Thanks for the article. I am looking forward to this show. The concept looks very good.

I love the title song of this show.

anjalipranav 11 years ago lol..KKR is out now...and never saw their angels there..hehe
captain in rotation...waht an idea.. and buchnan the man who destroyed ausie team...
cant help but laugh to see Sprite Ad now. srk shud b learning cricket frm dada like priety is learning frm yuvi instead of giving these crazy ideas in cricket.lol


Still stuck with the same old stale scoreboard.Take a look at the dynamic scorecard

You not only get scores but also BALL-BY-BALL report. When it comes to Live IPL, I must say,

this new site is the best.

Bigg Boss 14: Abhinav Shukla and Rubina Dilaik to be a part ...
17 minutes ago