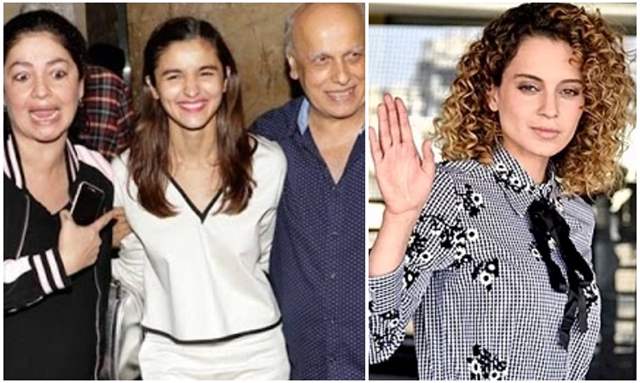 Bollywood actor Sushant Singh Rajput’s death has raised various fingers at Bollywood’s work culture and many artists are now coming forward to talk about their unpleasant experiences in the industry.

Sushant’s suicide case has also led to a massive outrage against Bollywood celebrities over the highly discussed ‘nepotism’ debate. Many A-lister celebs like Mahesh Bhatt, Karan Johar, Salman Khan, Alia Bhatt, Sonam Kapoor among others are facing the wrath of trolls for their alleged hypocrisy and negligence towards new talents in the industry.

Mahesh Bhatt’s daughter and Alia Bhatt’s sister Pooja Bhatt has now finally broken her silence and opened up about the accusations of supporting Nepotism in Bollywood. She took to Twitter to share a series of tweets and said that she could only laugh at the accusations.

“Have been asked to comment on the hot topic Nepotism that people are raging about. As someone who hails from a ‘family’ that has launched more new talent-actors, musicians & technicians, than the entire film industry combined I can only laugh.Facts don’t find takers. Fiction does,” she wrote.

Pooja went on to recall the time when the Bhatts were targeted for only working with newcomers and not chasing stars.  “There was a time when the Bhatt’s were accused of having something against established actors & made to feel inferior for only working with/launching newcomers & not chasing stars. And now the same people play the nepotism card? Google & tweet guys & won’t even say think & speak” she wrote.

The actor-filmmaker also mentioned actress Kangana Ranaut, who has been the pioneer of the nepotism debate ever since she made an appearance on Karan Johar’s chat show Koffee with Karan. Pooja mentioned that Kangana was launched by Bhatt productions in her debut film Gangster.

“As for Kangana Ranaut-She is a great talent,if not she wouldn’t have been launched by Vishesh films in “Gangster”.Yes Anurag Basu discovered her,but Vishesh Films backed his vision & invested in the film. No small feat. Here’s wishing her the very best in all her endeavours,” she tweeted.

Furthermore, Pooja also asserted that her upcoming film Sadak 2 has launched a brand new talent. “Even #Sadak2 gives birth to a brand new talent in the form of @Suniljeet72 A music teacher from Chandigarh who came to our office with no prior appointment,a dream,a harmonium & a brilliant song called ‘Ishq Kamaal’ that was absorbed into the film on first hearing by my father,” she wrote.

Pooja concluded by writing: “Toh yeh ‘Nepotism’ shabd se kissi aur Ko zalil karne ki koshish karo doston (Then try to humiliate someone else with these words friends). The people who have found their way into the movies through the springboard we provided over the decades know what we stand for. And if they have forgotten, It’s their tragedy. Not ours. Have a great day.”

What are your views on the same? Let us know in the comments below...