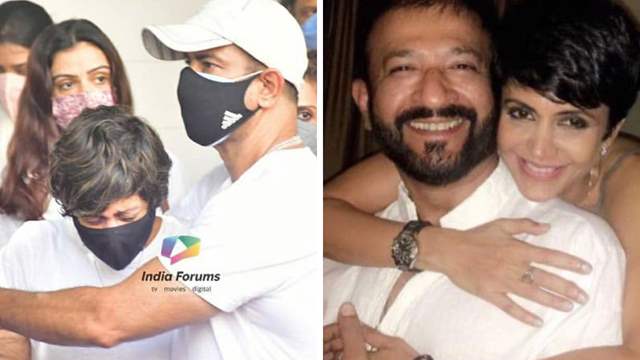 In a shocking turn of events, actress Mandira Bedi's husband and filmmaker Raj Kaushal passed away after suffering a sudden heart attack. He was 49.

Heartbroken and shattered with her husband’s sudden demise, Mandira Bedi was seen breaking down at the funeral. Raj Kaushal’s industry friends and actors including the likes of Ashish Chowdhry, Ronit Roy, Sameer Soni, Apurva Agnihotri, Huma Qureshi among others arrived at the funeral to pay their last respects.

In the pictures, Ronit Roy can be seen consoling Mandira who is deeply saddened with her husband’s loss.

Raj Kaushal had directed films like 'Pyaar Mein Kabhi Kabhi' and 'Shaadi Ka Laddoo'. Director Onir who worked with him on My Brother Nikhil had confirmed the news of his demise on Twitter.

As soon as the news of his passing away broke, B town actors including Neha Dhupia, Tisca Chopra and others took to social media to share condolence messages.

2 months ago Why exactly does anyone need to see pictures of her grieving. It's such an invasion of privacy and so disturbing. I will never understand why the media thinks it's okay to take such pictures in the first place. Only sick people get anything out seeing them.

+ 4
2 months ago Please stop clicking pics of grieving people. It’s just so horrible to publicise someone’s grief like that. May the spirit find peace. ☮️ I can’t help thinking that these heart attacks are a result of Covid 19. These days symptoms like pneumonia and heart attack are being passed off as isolated cases, instead of clubbing with the pandemic numbers. Hope that’s not the case because a virus that can’t be tracked, can’t be controlled. Strength and prayers for Mandira and family :( ❤️