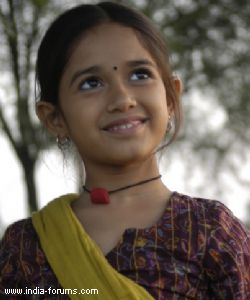 Today Phulwa (Jannat Zubair Rahmani) along with her friend Chunni and brother Babu brought a smile on the faces of nearly 500 school children studying in Chatrapathi Shivaji Vidhyalay in Dharavi..

A source states, "The students were very excited when they were informed that they were about to meet the bright and ever-smiling Phulwa from the COLORS and Swastik Pictures show...The school is situated in the slum area of Dharavi, and Jannat enjoyed the day with them. They played with bat and ball, talked a lot and even had food together".

A witness to the gala scenes says, "The kids from the school moved their legs on the number 'Sheila Ki Jawani' and also played many indoor games with Jannat. The little protagonist too enjoyed the whole event and was very content to see all the students of her age coming and joining hands with her. They too had yummy snacks together, like Burger and Pepsi".

We talked to Jannat who tells, "It was very nice to be with those kids of Chatrapati Shivaji Vidhyalay. We had a blast in the school, we had food, played few games and also danced (smiles)".

9 years ago jannat you are fantastic child actress. we loved to see you again in phulwa. you are playing role of phulwa exelently. we wish you get sucess in your life.

+ 4
10 years ago She is a sweetheart . COLORS TV knows how to promote a good show and a good actor , IMAGINE TV has never done to promote Kashi . aNYWAYS COLORS rocks and so is Jannat

+ 5
10 years ago she is damn cuteeeeeeeeeeeeeeeeeeeee
i love her acting.she is one of the best child actor ever........nd her smile i s so sweet

+ 4
10 years ago nawwwwwwwww how cute, its great seeing kids of the next generation coming together in a friendly manner & this jannat girl seems sweet & down to earth. wish her luck for the future.

11 years ago she lives her life through television, so why not her marriage ...