Phoonk 2 – Scared for a second 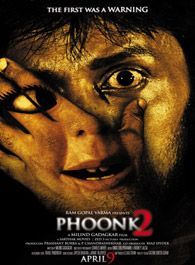 Rajiv (Sudeep) moves with his family to a palatial beach house. One day, his kids Rohan (Rishabh Jain) and Raksha (Ahsaas Channa) wander to the forest. Raksha who finds a pretty doll brings it home with her.

Rohan is the one who's attacked first by the doll. The doll animates only in front of him. But when the petrified boy wails about this no one believes him. Even then, Rajiv orders the gardener to throw out the doll.

To make up for Raksha's loss Rajiv's sister Arushi (Neeru Singh) who comes visiting with her husband Ronnie (Amit Sadh) gets her a new doll.

But the menace started by the possessed doll doesn't leave them so quickly. Rajiv's wife Aarti (Amruta Khanvilkar) starts hearing noises. She cries to her husband that something's definitely wrong with the place. On the other side, when Arushi and Ronnie make out in the forest they witness something 'confusing and weird' as Ronnie puts it. So they come huffing and puffing home.

While all this time we are patiently wondering who are what the ghost is all about, a tired Rajiv comes home to find his wife speak in an electronic voice. She finally reveals that she is Madhu (Ashwini Kalsekar), the woman who Rajiv got killed by a tantric. Madhu swears that she'd kill each and every loved one of Rajiv.

In the second half of the film, the countdown to slay begins. One by one, dead-bodies begin to drop. How many of Rajiv's loved one's actually die? Does he win over the ghost? The answers to these questions make up for the rest of the story.

Sudeep is splendid. Amruta Khanvilkar is good. Ahsaas Channa pulls it off albeit with a little difficulty. Zakir Hussain is terrific. Jeeva is gut-wrenching. Rishabh Jain is okay. Neeru Singh is painful. Amit Sadh is decent. Ashwini Kalsekar is muted.

Quality of corpses and blood need an upgrade. There are wires poking out of an amputated limb and no, we aren't convinced those were major veins. And for Pete's sake atleast get the color and consistency of blood right! We aren't naive enough to get duped by paint you know…

Closure isn't appropriate. Aarti possessed by Madhu is strong enough to fight and fast enough to outrun everyone only until the climax. When the time comes, she is easily pushed down. It's indigestible.

Phoonk 2 does its fair share to scare you in its right as a horror film. But it fails to haunt you once you're out of the theatre. The impact is feeble.

exclusive
Exclusive Akanksha Puri on why it was important to leave Vighnaharta ...
55 minutes ago