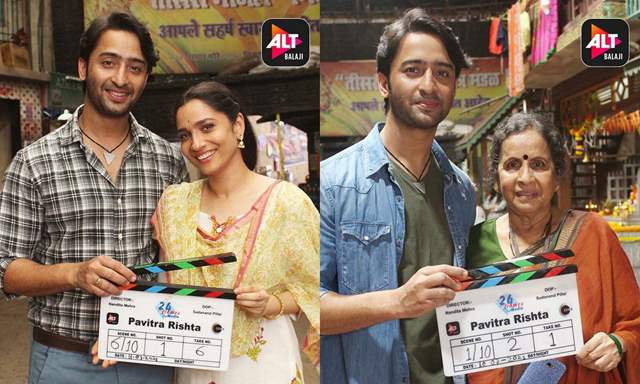 Pavitra Rishta has been one of the most iconic shows to ever be on India Television. It narrated the tale of Manav and Archana, played by Sushant Singh Rajput and Ankita Lokhande, respectively.

For a while now, there have been reports about Pavitra Rishta 2.0, and India Forums had reported that taking the male lead role this time will be Shaheer Sheikh, along with Ankita. And now, it is official. Carrying forward the story will be the two amazing and much loved actors, along with a bunch of actors reprising their roles.

Ankita also shared the post on social media as the team kickstarted their shoot yesterday (July 10).

Pavitra Rishta 2.0 will be streaming online (ALT Balaji and ZEE5) and will be a finite series with 15-20 episodes. The show will bring to us a fresh pairing and it will be interesting to see how will the two be recieved by the audiences.

Meanwhile, Shaheer's next along with the show will be Kuch Rang Pyar Ke Aise Bhi 3. The actor will return with the much loved franchise along with Erica Fernandes. As for Ankita, she made her Bollywood debut with Manikarnika, and the show will mark her digital debut.

2 months ago I just can't believe Ekta Kapoor has fallen so low to encash SSR death . She made Pavitra Rishta 2 to earn money using SSR name and fame .Shame on Shaheer ,Ankita and the rest of the cast for agreeing to do this show . Fans hailed Ankita as best EX girlfriend but she turned out to be worst . A forgotten actress who used her ex bf name to gain fame.SSR doesn't deserve this. Why can't people let him rest in peace

2 months ago Shaheer and ankita are looking like siblings... Till now shaheer used to have good chemistry with all his co-stars but not this time

+ 3
2 months ago What the hell, Shaheer is choosing dismal shows now. His work till krpkab was amazing I miss old days!